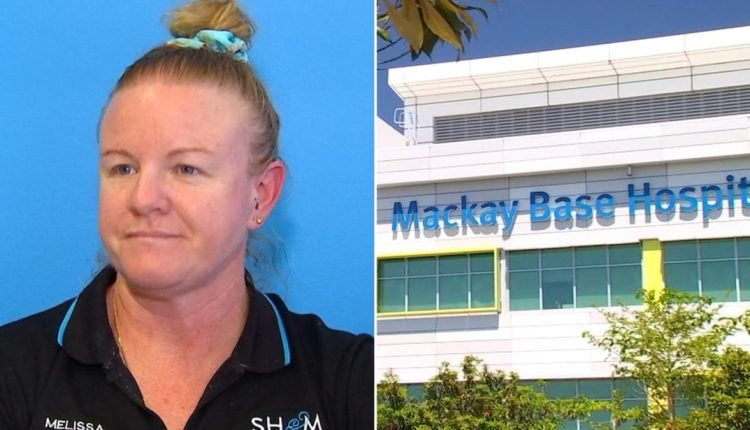 A Queensland woman claims her surgery was botched on the same day her surgeon was stood down over a spate of complaints from his other patients.

Melissa Ferrier’s harrowing revelations of her experience at Mackay Base Hospital come ahead of the release of a highly anticipated review into the hospital, amid allegations babies have died as the result of botched surgeries on pregnant women.

WATCH THE VIDEO ABOVE: Damning allegations against Mackay Hospital emerge

Ferrier went into the hospital for a hysterectomy in October last year.

What was unknown to her as she prepared for the procedure was the growing number of complaints against the surgeon who operated on Ferrier.

When she woke, she was given devastating news.

“The first thing they said to me was that he had cut my bladder and also that I’d received a full abdominal cut rather than keyhole surgery, which is standard,” she told 7NEWS.

“Nobody could explain why he decided to do the full abdominal cut or why the bladder was cut, and I was also left with a rare hematoma (collection of blood) in the stomach area.”

Ferrier said she was “upset” and confused, but getting answers as to “what went wrong” was difficult.

“We never got to see the surgeon again after that. He was actually stood down that afternoon,” she said.

She said the impacts of the surgery were “a lot to deal with”.

“It left me with a lot longer recovery. I spent a lot longer in hospital. I was left with a catheter for quite a while and ongoing issues now that are just starting to be fixed,” she said.

Ferrier said she became “angry” when she learned of the “harm” caused by the surgeon to others.

The hospital and an external investigation team contacted her later explaining that there would be a review into the facility’s obstetrics and gynaecology practices, she said.

The independent review was called days before Ferrier’s surgery and related to “clinical practice and any other factors relevant to safe and effective patient care”, the Mackay Hospital and Health Service (MHHS) said at the time.

When the surgeon was stood down after operating on Ferrier, a phone hotline set up as part of the review had already received 19 calls.

In July, the state Health Ombudsman made the decision to ban the surgeon from performing surgeries, providing intrapartum care and being the most senior person rostered on any shift when practising as a registered health practitioner.

The MHHS said on September 8 it had received the report but would “consider the report before releasing any outcomes and actions”.

It’s expected the Queensland Health Minister Yvette D’Ath will release and respond to the report on Friday.

Shine Lawyers has been working with the victims of the hospital.

Special counsel Sarah Vallance said among the worst cases were those patients who had lost babies.

“We’ve received a range of calls from women who have been injured at the Mackay Hospital and they’ve suffered a variety of injuries,” she told 7NEWS last week.

Local state MP Amanda Camm slammed the time it had taken for the report to be released, as well as the fact that Premier Annastacia Palaszczuk did not release it herself when she visited Mackay on Thursday.

Ferrier said she has only begun to learn of the full scope of allegations against the surgeon.

“It’s been really hard to find information – even find other ladies out there, for privacy reasons, who are going through this as well,” she said.

“It’s been a very insular process. But recently I have been able to get in contact with some other women who have gone through different experiences, but with the same doctor.

“We have formed a group to make some noise and get some answers to find out what’s going on.”

WATCH THE VIDEO BELOW: Little Queensland girl dies after being misdiagnosed

Southeast to be smashed by wet weather over October long weekend

First year in the German chancellery..…