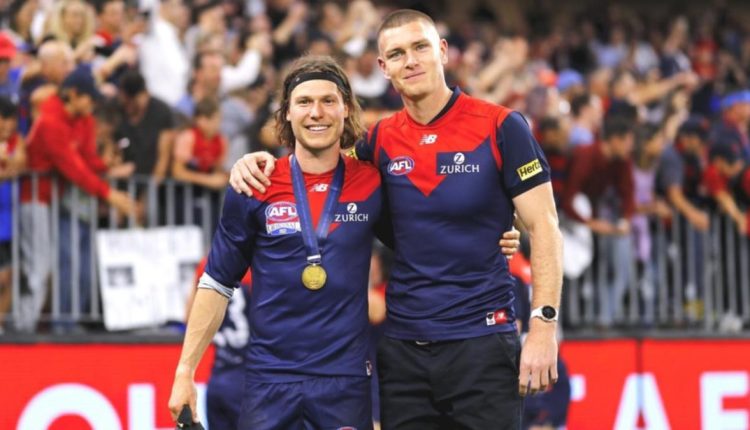 Adam Tomlinson could be set to join his third AFL club after the Melbourne key defender/utility reportedly completed a medical with the Western Bulldogs.

RSN’s Mark Stevens reported on Thursday morning that Tomlinson had been sounded out by the Bulldogs.

Since crossing from the GWS Giants, the 29-year-old has played only 25 games at the Dees, including just 15 in the past two years – the most recent of which was in round 19 against the Bulldogs.

One of the founding members of GWS’ inaugural team in 2012, Tomlinson – who was used at both ends of the ground and even on the wing as a Giant – has played almost exclusively as a key defender since joining the Dees ahead of the 2020 season.

He held down a spot as a key defender in Casey’s VFL premiership last week, gathering 19 disposals and taking three marks in torrential rain.

The Bulldogs present as a curious suitor, considering they already have to work out how incoming talls Rory Lobb and Liam Jones will fit into a side which already includes big men Aaron Naughton, Sam Darcy, Tim English, Jamarra Uge-Hagan, Alex Keath, Ryan Gardner and Zaine Cordy.

If Naughton, English and Ugle-Hagan are all considered locks in the side, it would be hard to see any more than four of Darcy, Keath, Gardner, Cordy, Lobb, Jones, and Tomlinson playing together.

Luke Beveridge has done stranger things at the selection table but, taking a long-term view, seven doesn’t go into four, and the Bulldogs can’t carry so much tall timber around in the one side.

While the silly season has begun for the Bulldogs and 15 other clubs, Sydney and Geelong have more important matters to attend to this Saturday.

Sydney coach John Longmire is imploring his players to believe in their system after dumping young forward Logan McDonald for the AFL grand final against Geelong.

“It’s tough to go out of the team at any time but particularly for a grand final.”

Reid, with Luke Parker the only players remaining from Sydney’s 2012 flag-winning team, was substituted out of the preliminary final because of a groin injury while McInerney suffered a sprained ankle.

Geelong named an unchanged side, including Max Holmes despite the wingman being subbed out of their preliminary final due to a hamstring injury.

The Cats, on a 15-game winning streak, enter the MCG finale as warm favourites.

But Longmire said his Swans, who have won their past nine games in a row, must believe in their system to cause an upset.

“Just believe in what you do, the system,” Longmire said of the message to his players.

“It’s about turning up and about execution on game day.

“They (Geelong) finished two games (wins) clear at the end of the home-and-away season and had a great win last week so they are clearly a very strong team.

“They have been fantastic this year but we look forward to that challenge.

“It is a big game and we just have to make sure we back in what we do.”

Both clubs will feature in the grand final parade on Friday, but the latest edition of the fanfare differs markedly from the past.

Instead of travelling in slow-moving open-top cars through Melbourne’s central business district, players and coaches from both clubs will be paraded along the Yarra River in a cavalcade of boats.

They will then greet fans at Yarra Park, outside the MCG.

James Hird reveals Essendon ‘redemption’ plan: ‘I think I can make it better’