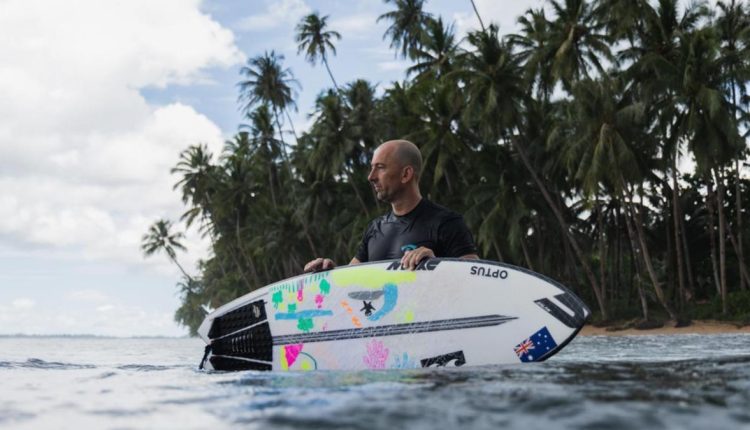 Nazaré, Portugal – a beachside town about 122km from the nation’s capital Lisbon.

Just off the coast of this traditional fishing town is the Nazaré Canyon, a bizarre geomorphological phenomenon that allows giant waves of up to 30 metres high to form.

Running a length of about 170km and reaching a depth of 5000m, it is the largest submarine canyon in Europe.

These mega waves have drawn the attention of surfers from all around the world, keen to take on the death-defying challenge.

In 2022, German surfer Sebastian Steudtner created a new world record when he conquered a 26.21m wave at Nazaré, officially the biggest wave ever surfed.

Now, it’s Australian athlete Matt Formston’s turn to tackle the formidable waves in Nazaré. Over the past 12 months, a film crew has been following Formston, documenting his preparation in the lead up to the big event.

With all the training Formston has done, he said he’s ready to get the job done.

“I’m just more excited than anything else,” he told 7NEWS.com.au.

There is one slight thing that differentiates Formston from those who came before him. He’s blind.

Formston was born with full vision, but lost 95 per cent of it when he started school at five years old due to a genetic disorder called macular dystrophy.

With all of his central vision gone, and only a small percentage of his peripheral vision remaining, Formston can only see out of the outsides of his eye.

“Over the last couple of years I’ve actually lost a bit more vision, so I’ve now only got three per cent peripheral vision in my right eye, and one per cent in my left eye,” he said.

Thanks to his parents support and encouragement from a young age, Formston’s disability has never stopped him from doing whatever he wanted to do.

The father of three has been a professional athlete for over 10 years, having competed in the 2016 Rio Paralympics for cycling and achieving four World Champion titles in surfing.

While Formston had a long career as a professional cyclist, growing up in the northern beaches of Sydney, surfing was always his true passion.

“There was just surfing all around me,” he said.

“My dad would push me into waves on a boogey board … I learnt to feel the waves and learnt the feel of going through the ocean.

“If we wound back to when I was a teenager, if they had para-surfing competitions then, I would have always been a competitive surfer, and probably never would have done those other sports because I love everything about surfing,” he said.

Formston competed in his first para-surfing competition in 2016 and the rest is history.

The next big challenge

As a blind surfer, Formston uses his front foot as a sort of a cane to help him manoeuvre on the waves.

He said riding bigger waves are actually a lot easier than the smaller ones he is used too.

“There’s more time to go up a big wave and down a big wave, whereas on small waves, you can be going up and down, up and down so quick, and I’m using my front foot as my cane to feel the wave and it’s all happening so fast,” he explained.

“On a big wave, there’s more power …. everything about big waves is for me, just feels like the right thing to do.”

As for how big he expects the wave he’s going to surf to be – Formston said he doesn’t want to put a specific number out there.

Instead, he’ll go out with his team who have joined him in Nazaré, and they’ll collectively make a decision on what wave he’ll attempt, dependent on the conditions.

“We’ll keep pushing it and hopefully get some bigger and bigger (waves) and if I still feel comfortable, keep getting bigger.”

In preparing to tackle these mega waves, Formston said there’s been a “definite shift” in his training schedule.

He’s had to focus more on the physical side of things, with the last 12 months spent doing breath training, trying to build up his capacity to tolerate carbon dioxide so that he can hold his breath for longer.

Thanks to his extensive preparation, Formston said he’s ready to get the job done, and is feeling less nervous about the prospect of riding a 20m plus wave.

“For me, one of the messages I like to share with my audiences when I do motivational speaking is, the unknown is the biggest, most scary thing in the world,” he said.

“I think when people go Nazaré is scary, it’s dangerous, it’s big – that’s the first thing people do, the boogeyman is in the closet and it’s really scary because you don’t know what it is.

“As I’ve …. talked through what it is, understanding really what the wave is and how much training I’ve done, as I’ve built that bank of data in my head, the fear is going away.”

Formston’s mega wave journey has been documented every step of the way by director Daniel Fenech and his crew for a feature length film called The Blind Sea.

The two have been mates for years, and Fenech said Formston’s story has taught him the importance of dreaming big and working hard.

“[Formston] lives this incredible life and for us to put this documentary together has been a wild ride,” he told 7NEWS.com.au.

“We’re showcasing what it’s like to play at that elite level, and it’s really inspiring … I hope that audiences will be inspired to achieve their dreams too.”

For Formston, it’s been “weird” but also “an honor” to have Fenech and his crew document not only his journey towards Nazaré, but also what life is like for the 44-year-old, and how he’s turned what could have been a barrier into his greatest strength.

“(But) then I did all those things.

“People will always say ‘you can’t do that’, and they’re naysayers. People definitely would say that a blind person can’t surf Nazaré.

“I would like people to take away that message. Whatever they choose to do in their life, they can.”

Formston will attempt to take on Nazaré this weekend, pending the ocean’s conditions.