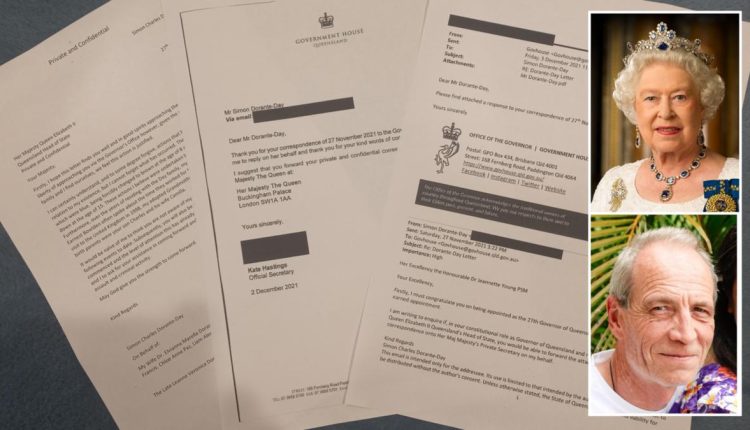 A Queensland man who claims to be the secret son of King Charles III and Camilla has shared his final correspondence with the Queen, a week after her historic funeral.

Simon Dorante-Day has attracted headlines around the world with his claims, which he says are the result of decades of research (see box at bottom of the page).

Watch above: Simon Dorante-Day reacts to the Queen’s death

Now the 56-year-old father-of-nine has released his last letter to the Queen, where he appealed the monarch to step in and take action regarding his case.

Dorante-Day has never revealed the contents of his private note – which was posted last November – until now.

“I’ve kept the contents of the letter confidential until now, but with her passing I think it’s appropriate to share my last correspondence with her.

“When she passed away, I was disappointed that she had died without responding to my message. That was my first thing – just sad, because that window of opportunity has closed.”

In the letter to the Queen, Dorante-Day explained that he reached out to the Queen after approaching Queensland’s Governor General Dr Jeanette Young about his case.

“I take the liberty of approaching you via the Governor’s Office however, given the position with which my family and I find ourselves, we feel this action is justified,” he wrote.

He then went on to detail claims that his appearance had been altered during his childhood through a series of medical procedures.

“I can certainly understand, and to some degree forgive, actions that have been taken in the past in relation to my existence, but I cannot forget what has occurred,” he continued.

“These actions I believe were undertaken to conceal my true identity.”

Dorante-Day then stated that his adopted grandmother – who had worked for the Queen – had told him directly that Charles and Camilla were his birth parents.

“Furthermore, over the years of residing with the Day family, my adopted grandparents Winifred and Earnest Bowlden often spoke about the time they worked for the Royal household,” he wrote.

“Then on my last visit to the United Kingdom in 1998, my adopted grandmother Winifred told me herself, that my birth parents were your son Charles and his wife Camilla.”

He then finished off his note by appealing for help with his case.

“It would be naive of me to think you are not aware of my claims. Nor that you have not been following events to date.

“Subsequently, you will all be aware of the actions I have recently commenced and the level of attention this has already received.

“I am writing on behalf of my family and I to ask for your assistance in coming forward and resolving this issue and stopping this global assault.

“May God give you the strength to come forward.”

Dorante-Day said he is now looking forward to taking up his fight with Charles directly.

“I’m now looking to the future and I’m ready to take on Charles,” he previously told 7NEWS.com.au.

“I’ve still got to climb it to prove what I know to be true. So from that regard, nothing has changed.”

Simon Dorante-Day has provided these claims to support his belief that he is Charles and Camilla’s son.

The all-new $2 coin that’s skyrocketed to $3,000 in value since the Queen died

Fans ‘melt’ over adorable detail in Princess of Wales moment