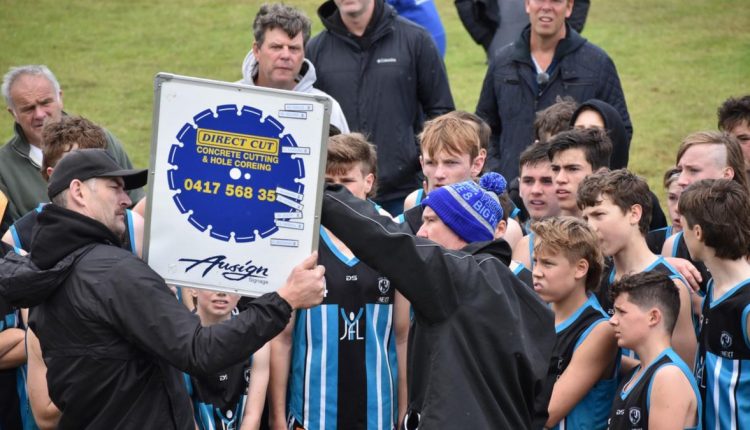 One of the largest junior football leagues in Melbourne has made big changes to help improve the playing experience of children, including new rules for parents.

The Yarra Junior Football League will enforce shorter breaks and a no-parent policy in quarter and three-quarter time breaks to crackdown on bad behaviour and allow children to listen to their coaches without outside influence.

WATCH THE VIDEO ABOVE: Umpires distracted and fail to award a goal to NZ.

“It does allow our coaches to coach and not have parents trying to coach their own children.” Bailey said on Thursday morning.

“It’s not just based around behaviour … it’s a number of things — we think it actually improves the experience for kids on game day.

“This is quite common, it’s being done across Victoria.

“But we do have issues that occur particularly around our umpires who are in the centre of the ground, and sometimes behaviour of parents on the ground.

“We do know that it does happen, where someone will go and stare at an umpire or walk past and make a comment to a young umpire.

“The other thing we really like about this policy is, and it’s worked in other clubs around Victoria – is that it does allow our coaches to coach and not have parents trying to coach their own children.

“This is one of a number of initiatives we put to clubs prior to Christmas … the whole focus is about making this the best possible experience for kids when they go to footy.

“We’ve spoken to clubs, we don’t need to not have parents listening to coaches or not being involved, we’re actually encouraging our clubs to bring the huddle to the bench or to the fence and just have the parents standing on the other side of the fence.

“We still want parents in at the end of the game and when the kids are singing the song, people are still allowed to go on the ground at half-time.

The league has more than 11,000 participants that all compete on the same day of the week.

“One of the factors is we’ve got nearly 500 teams playing on a Sunday and a lack of facilities, so what it does allow us to do is get through a pretty tight schedule in a reasonable time frame, so that’s the principle purpose of the rule,” Bailey said.

“We just think this is a really simple, one of many things that can improve speeding up the day.

“We’ve got clubs with 35 teams, so it allows us to get through the day as quick as possible.

“It’s not going to be heavy-handed, it’s going to be a really positive conversation and say ‘Hey this is what we are trying to do, do you mind stepping back off?’

“It’ll be done in a very positive and passive way.”