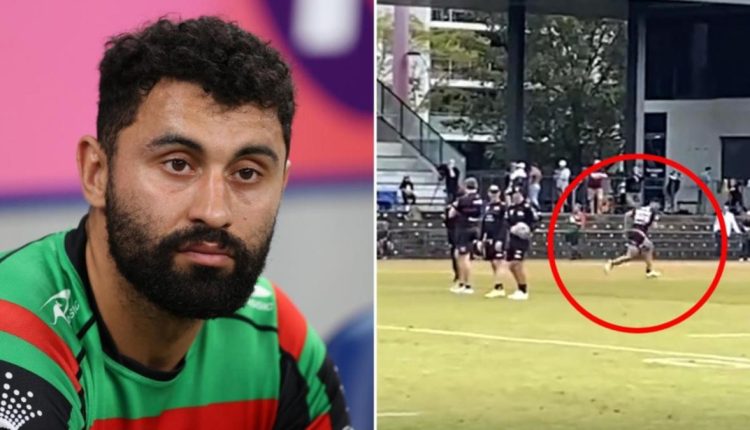 South Sydney will put their faith in journeyman Richie Kennar to fill the void left by Alex Johnston after the Rabbitohs winger was ruled out of the NRL preliminary final meeting with Penrith.

Johnston, who sustained a hip flexor injury in last week’s win over Cronulla, trained separately from the main group at Redfern Oval on Friday.

The Papua New Guinea international, who has a league-leading 30 tries in 25 games this season, was put through a late fitness test but will not be risked against the Panthers.

“He (Johnston) is out and he was never going to really be a chance of playing,” Souths coach Jason Demetriou said.

Kennar trained on the left flank, with the coach confident the 27-year-old could handle the occasion in his second NRL game of the season.

“I’m happy for Richie to get the opportunity. The game suits him because it’s going to be physical,” he said.

Josh Mansour – the other outside back in the Rabbitohs’ extended squad – did not train on Friday, with Demetriou unsure of the Penrith winger’s whereabouts.

Kennar, who has previously had stints with Melbourne, Brisbane and Canterbury, registered a hat-trick in his sole game for Souths this year when they defeated Newcastle in round 17.

They are the numbers that display three years of rugby league dominance across all grades and show the vast depth behind Penrith’s shot at another NRL grand final.

From the NRL to the fourth-tier Sydney Shield, and right down to the under-17 Harold Matthews Cup, the Panthers have won 80 per cent of their matches since the start of 2020 in a level of dominance not matched this century.

That pre-eminence will be displayed crystal clear this weekend.

On Saturday night, Penrith will push for a spot in a third straight NRL grand final by overcoming South Sydney.

The next afternoon, players will head to CommBank Stadium to support their NSW Cup and under-21s Jersey Flegg teams in grand finals.

Already this year, Penrith have won the under-19s SG Ball competition and were finalists in the under-17s Harold Matthews Cup.

Feeder-club St Marys finished second in the third-tier Ron Massey Cup, potentially making them the only team in the Penrith senior system not to play in a decider, after the club’s Sydney Shield side beat Penrith Brothers in that competition’s grand final.

Across the NRL and NSWRL’s seven senior and junior men’s competitions in the past three years, Penrith’s record stacks up with 202 victories and just 51 losses.

“I was proud of that,” coach Ivan Cleary said of Penrith’s lower-grade triumphs.

“It’s a lot of people that are all on the same page. The number one thing we have is alignment from the top all the way through.

“It’s easy to say but it’s harder to do.

“A lot of talented players helps as well, but it’s because of a lot of people working really hard and moving in the right direction.”

In reality, only COVID-19 has stopped Penrith winning more.

Penrith’s reserve-grade strength has long come in handy during the State of Origin period, while former Panthers Sam McKendry and Geoff Daniela headline a slew of former Penrith under-20s players in lower-grade sides.

“The club’s tapped into really good junior development in Penrith and obviously with the country as well.

“But then you need good leadership and that starts with Ivan as coach and Matt Cameron as our CEO.”

Kanye West slams Kim Kardashian for ‘putting a** out’ for magazine