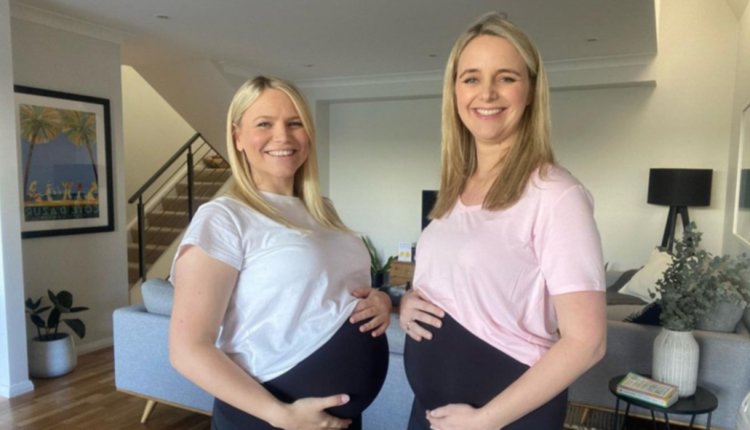 One day last year, Laura Francis-Mathers sat on the bed next to her wife Suzie, hoping for good news.

She flipped over a blue and white pregnancy test and both of them screamed with joy. Suzie was pregnant.

“We were both in shock,” Suzie told 7NEWS Spotlight.

Soon after, they sat in the same place – this time, Suzie held the pregnancy test. Laura counted down from three, then they looked at the result.

Both were speechless. After months of trying to conceive, they weren’t just having one baby – they were having two. And they would be having them at the same time.

The couple’s story of their double conception made headlines around Australia, and thousands followed their enthusiastic updates on their shared Instagram account.

Many of their followers praised the two women, both now 38, for normalising same-sex relationships and being open about their joint pregnancies.

But beneath their miracle was a painful two-year journey of hormone injections, early miscarriages, repeated heartache – and an IVF clinic that’s now facing a class action lawsuit over an unforgivable bungle.

Chrissy Teigen shares health update: ‘So much better with that’

Both TV producer Laura and musical theatre actress Suzie are from Australia, but it took moving around the world to London for them to meet.

It was 2015 and both were following their career dreams – Suzie to perform on the West End, and Laura to work in TV – when they were introduced by a mutual friend.

At the time, Laura was open to meeting someone – but in her mind, that person was probably “tall, male, English”.

For Suzie, it was “absolutely not” on her radar that she and Laura would be more than friends.

Then Laura kissed her – and it changed everything.

After that came a proposal from Suzie, then a fairytale wedding at a French castle in 2019. The next step was starting a family.

“It was something that was really important to both of us, and even early, early on in our relationship, we were like, ‘I want to have kids’,” Suzie said.

Suzie had some concerts she was booked to perform in, so it made sense for Laura to try to get pregnant first.

After they moved back to Australia in 2019, they began trying to get pregnant with Monash IVF, one of the country’s leading fertility clinics.

“We were so excited, and it was the first step to creating our family,” Laura said. “We didn’t know what was ahead.”

At first, Laura’s IVF treatment seemed to be going well. Almost too well, she later said.

She woke up at the Monash IVF clinic to a nurse leaning over her. “We got 50 eggs,” she recalled the nurse telling her. “This is the most we’ve ever seen at this hospital.”

After five days, they got a phone call – of the 50 eggs, 13 embryos were produced.

“It was an amazing result,” Suzie said. “We were thrilled.”

Monash IVF had developed a revolutionary non-invasive genetic test that claimed only viable embryos would be transferred – thereby reducing the frustration and cost of IVF treatment.

With all 13 eggs fertilised to become embryos, Laura and Suzie decided to do genetic testing to see whether any were abnormal.

“That was presented to us as an absolute no-brainer,” Laura said.

A few weeks later, they got the result – just two of the 13 embryos were normal, and one was inconclusive.

“It was a huge, huge drop for us,” Suzie said. “We got to the point where we were grateful for the results because, gosh, we could have wasted 10 months.”

Over the following months, Laura went through the process of having the potentially viable embryos transferred and going through three more rounds of IVF to collect more eggs. But by September 2021, they were left with nothing.

“We need some time now to give you a rest and take a break from not only the emotional rollercoaster of everything, but the drugs, the pumping yourself with hormones every day, the early morning appointments.”

Laura agreed: “My body was telling me we needed to stop.”

They decided to try a different approach. This time, it was Suzie’s turn.

By October 2021, Suzie had two viable embryos and was preparing to transfer one of them. Then the women got an unexpected phone call.

Monash IVF had retested Laura’s embryos. The embryologist told her, of the 10 classified as abnormal, eight were now considered viable.

The embryos had been misclassified.

“You told me and I just burst into tears,” Suzie added. “I was like, ‘How the hell have we gone through the last two years unnecessarily?’.”

‘We rolled the dice’

Many others had opted for the testing, hoping it would lead to a healthy child. Instead, the test was the cause of their disappointment.

Lawyer Michel Margalit, who is representing 200 people including Laura and Suzie as part of a class action lawsuit against Monash IVF, says the test should never have been approved.

“It needed further work, and they just hadn’t trialled it properly,” she said.

One of Margalit’s clients had become pregnant with a donor embryo when she was told her own embryo was misclassified. Others had given birth to genetically unrelated children, only to later find out that their embryos were viable after all.

Margalit said her firm had spoken with a number of people closely connected with Monash – including both staff and external people – who raised questions about the testing.

“There were multiple questions raised, and they were always rebuffed,” she said. “They forged ahead in spite of reasonable questioning as to the legitimacy of the trial.”

In September 2020, Monash IVF launched an internal review – and later that month it suspended its genetic testing program.

In a statement to 7NEWS Spotlight, Monash IVF said it had acted at all times in the best interests of its patients.

“We are committed to continuing to support our patients and provide quality IVF services,” it said.

“Monash IVF remains a leader in reproductive health care and continues to work towards improving outcomes for our patients.

“It would be inappropriate for Monash IVF to respond further at this time as the matter is subject to current proceedings in the Victorian courts.”

Once Suzie and Laura got over their initial anger and shock, they began to focus on the positives. They now had eight more embryos available for transfer.

They went out for dinner and weighed the pros and cons. They thought of how nice it might be to have maternity leave at the same time, for their two children to grow up at the same time.

“We rolled the dice,” Suzie said.

Lauren lost her soulmate to brain cancer. Two years later he gave her a baby from beyond the grave

Suzie soon she found out she was pregnant.

“I think neither of us thought that I would fall pregnant on my first transfer. We’d been through so much with Laura before that, and so to … fall pregnant immediately was kind of mind-blowing,” Suzie said.

“We both screamed, I think,” Laura said.

“It’s just because it’d been such a long journey with me for so many reasons that to actually see that really strong positive line, I was in shock. It felt like a miracle.”

Then, just a few weeks later, Laura found she was also pregnant.

There were challenges – Suzie was rehearsing for a show at the Sydney Opera House during her pregnancy, and needed to be back on stage just weeks after the babies were due.

There was still lingering anxiety from the initial classification of Laura’s embryo as abnormal. Each time she went for a scan, they were nervous that there was something wrong.

But both being pregnant meant they understood how the other was feeling.

As they wrote on their Instagram, they found comedy in their shared grunts and groans from putting on shoes and bending over. They wore matching pregnancy leggings, popped reflux medication Omeprazole together to deal with their shared heartburn and reflux, and upgraded their bed to have two pregnancy pillows.

“To actually really understand what the other person is going through – it’s brought us even closer together,” Laura said.

On July 19, Suzie and Laura made an Instagram post that would turn out to be not far off predicting the future.

“Suzie still thinks they’ll come on the same day but Laura keeps telling her to stop jinxing it,” they wrote.

Laura was due three and a half weeks later but, within four days, their healthy baby boy Marlow was born.

Laura believes her flood of love for Mackenzie helped kick off Marlow’s birth.

“Basically what happened was, this one was born,” Laura said, referring to Mackenzie. “And I fell in love.

“They came out, and they’re both perfect.”

In the months since, they’ve been juggling their two newborns and Suzie’s rehearsals. There are quirks about having two babies at once – Marlow and Mackenzie aren’t on the same sleep schedule – and they’ve each been trying to breastfeed both babies.

Reflecting now, they’re aware that in the past same-sex couples might not have been comfortable doing what they’ve done.

Laura remembered a time when they were getting their nails done together, and a fellow customer asked whether they were friends.

“And I said, ‘Oh no. We’re married’,” Laura recalled. “’We’re having babies three and a half weeks apart’. And she … got tears in her eyes, and she said, ‘You’re very brave’.

“And look, I could absolutely be reading into things, but you just actually saw quite a bit of pain in her own response and we realise how far we’ve come that we can openly live this life and not think too much about it, to be honest.”

They also receive a lot of messages, thanking them for being open about their relationship.

“That for us is really fulfilling, because it’s like, well we are just a couple,” Suzie said.

“We are just like everybody else. We are starting a family like every other married couple that wants to start a family.”

Suzie Francis-Mathers will be performing Do You Hear The People Sing?, a concert celebrating the creators of Les Miserables at Melbourne’s Hamer Hall from September 27-28, and at Sydney Opera House from September 30-October 2.

Mum, 41, desperate for baby with 74-year-old partner hits out at ‘unfair’ hurdle