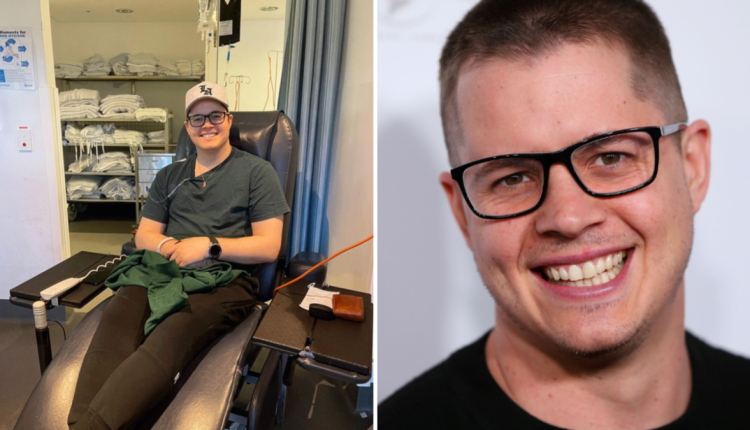 X Factor star and former Home and Away actor Johnny Ruffo has shared an important moment with his Instagram followers, announcing that he has completed his chemotherapy treatment for 2022.

“Another year of chemotherapy done, it wasn’t easy but I made it through,” he posted.

WATCH THE VIDEO ABOVE: Johnny Ruffo opens up on cancer battle

“Can’t wait to have a few weeks break over Christmas & spend some well-earned time with my family.”

The post was accompanied by a photo of Ruffo in hospital, receiving treatment but still smiling and doing the thumbs-up.

Ruffo is battling his second round of brain cancer.

In August this year the singer and actor revealed that his diagnosis was terminal but he was determined to keep battling the disease.

His most recent post drew plenty of well wishes and Christmas messages from his fans and followers.

Georgie Parker added: “Good on you mate. Lots of love to you and your family this Christmas.”

“Well done!,” Ada Nicodemou wrote. “I hope you have a great Christmas.”

“You are a warrior,” Colette Mann said, while Anthony Koutoufides called Ruffo a “champion.”

Non-celebrity followers also chipped in with messages of support.

“If anyone deserves a break it’s you, enjoy the holidays and the fam fam,” one follower wrote.

“We love you Johnny, you’re such a fighter, don’t give up!” wrote another.

Earlier this year, Ruffo told 7Entertainment he was looking forward to Christmas because he would be catching up with his brother Michael, who has been living in Ireland, for the first time in a while.

“My brother lives in Ireland now so I haven’t seen him for three years and he’s coming home for Christmas and I honestly can’t wait to see him,” Ruffo said.

Ruffo said his brother was his “closest” confidante other than his girlfriend Tahnee Sims.

“We’re thick as thieves. Honestly, he is my hero, he is everything to me. And I cannot wait to see him,” he said.

“I don’t know how I’m going to react, I cannot wait, he’s everything.”

Ruffo touched on the brothers’ long-distance relationship throughout COVID and his second battle with cancer, calling Michael’s physical absence “the most glaring impact” of it all.

In his book No Finish Line, Ruffo wrote that Christmas 2021 was “very quiet and low-key.”

“Sadly, the most contact I could have with my brother in Ireland was via WhatsApp,” he wrote.

“All jokes aside, I miss him a lot because out of all the men in my life, my brother is the one who sees me even better than I can see myself.”

Ruffo recently revealed that he’d love to return to Home and Away for a cameo appearance.

Ruffo appeared as Chris Harrington on the Channel 7 show from 2013 to 2016, winning a Logie Award in 2014 for Most Popular New Talent.

“I’d love to go back on Home and Away and spend some more time with Irene,” he told Yahoo Lifestyle, referring to McGranger’s character Irene Roberts.

Asked how he’d like to reappear on Home and Away, Ruffo said he’d love to just “show up” one day at the Pier Diner.

“Just waltz in, like, not tell anyone, just waltz on in and order a coffee,” he said.

Rebel Wilson took to the stage to present an AACTA award. What followed was a major dig