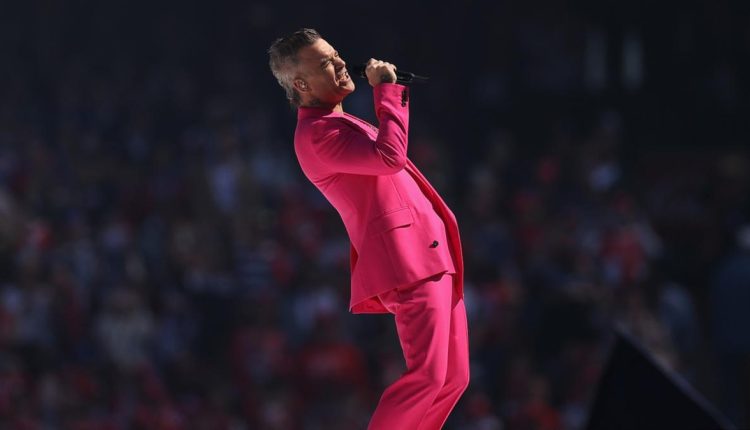 As the nation prepared for the almighty AFL grand final, music superstar Robbie Williams’ brought a tear the eye of some, with his touching tributes to two Aussie icons.

Performing as the pre-match entertainment at the MCG on Saturday, Williams’ pointed to the Shane Warne Stand, before dedicating his next song to “one of Australia’s greatest rockstars”.

“Love you Warnie!” he shouted as he began to sing his top hit ‘Angels’.

Williams was famously fond of Warne, and the pair had become good friends.

He was unable to make it to Australia for Warne’s funeral earlier in the year, so he recorded an acoustic version of the song in his memory.

In a bid to another Aussie legend, Williams then sang You’re the Voice, dedicated to Farnham, who recently underwent reconstructive jaw surgery.

“The next song is the unofficial national anthem of Australia,” Williams told the crowd.

“Let’s all send our love to John and his family.”

Farnham’s family said John was watching from hospital and was deeply touched by Robbie’s performance.

“We were delighted to see Robbie Williams dedicate his performance of You’re The Voice to John,” a statement from Farnham’s wife Jill and sons Rob and James said.

“John was watching from hospital and was deeply touched by that very generous gesture. He thoroughly enjoyed Robbie’s performance too.”

Diagnosed with mouth cancer, Farnham had surgery to remove a tumour last month and his recovery is “moving in the right direction”.

The You’re The Voice singer’s operation involved reconstructive surgery, as part of Farnham’s jaw had to be removed in order to remove a cancerous tumour in his mouth.

Given the nature of Farnham’s surgery, it is unclear if he will ever sing or perform live again.

On Thursday, Farnham’s wife Jill shared an update on her husband’s progress as he recovers from the intensive 12-hour surgery.

“His medical team are very pleased with his progress over the past month. He was moved from ICU and into a general ward a couple of weeks ago.

“That in itself was terrific progress.”

She shared that her husband has been transferred into a rehabilitation facility and that “these steps mean things are moving in the right direction and for that we are enormously thankful”.

“Our family is so very grateful to all the remarkable teams of Victorian medical professionals who have taken such good care of John,” Jill continued.

“These outcomes are a credit to their dedication, skills and compassion.

“We have received many thousands of beautiful messages via the weloveyoujohn.com.au website since it was launched.

“Being surrounded by this much love and support has meant the world to us all. Thank you,” the statement ended.

“I know there’s a lot of people saying, ‘Oh is he going to sing again?’

“That’s not even crossing John’s mind or his family’s mind. At this point in time, he wants to find out the things that he’s able to do in a nice orderly fashion and he wants to get home, sleep in his own bed and be with his family,” he said.

“He’s also knocked out by the thousands and thousands of messages that have come in,” sharing that the website has been “inundated”.

Williams’ performance was one of the biggest grand final entertainment performances in the league’s history, as the AFL decider returns to the MCG for the first time since 2019.

“I am so excited to be performing for all the fans, on the hallowed turf of the MCG, for the biggest game of the year,” Williams said earlier in the year.

“I’m really looking forward to performing with a cast of very talented local Australian musicians, and I can’t wait to see you all on that last Saturday in September.

“If it goes well, I might even put my hand up to be the next CEO of the AFL.”

Rock fisherman dies after being swept off rocks in Sydney