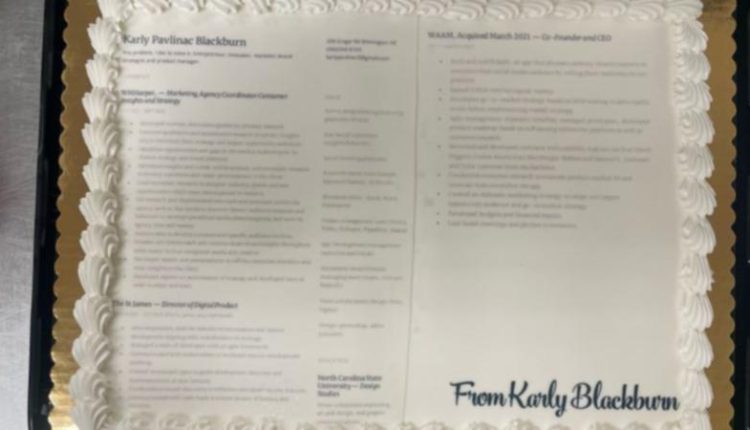 A job seeker has gone above and beyond to deliver a stand-out resume on a cake to her prospective employers.

Karly Blackburn, from North Carolina, knew the only way she could set herself apart in a competitive job market was to get creative.

Instead of submitting a job application the traditional way, the 27-year-old thought her CV – printed on a cake – might give her the edge over other applicants while showcasing her skills.

“A couple of weeks ago I sent my resume on a cake to Nike. Yes, an edible resume on top of a cake,” Karly wrote on LinkedIn.

“They are not currently hiring for any positions on that team, but I wanted to find some way for the team to know who I was.”

After doing her research, she discovered the American apparel brand was hosting a huge party.

“What better way than to send a cake to a big party,” she said.

“How could I get an edible resume on top of a cake delivered to a party I wasn’t invited to, to the team I wanted it to go to.”

She managed to get a custom made cake with her resume printed on top.

Karly tasked a driver named Denise with delivering the cake to the “right person” at the party.

“I am so grateful Denise was the driver that day. I knew navigating Nike’s large campus was a feat, but combine a giant party with tons of people on top of that adds another layer of complexity to this delivery,” she said.

“I talked to Denise on the phone and she said to me, ‘Karly I know this is important to you, and I will do whatever it takes to get this cake to where it needs to be’.

“When Denise was asked to leave the cake on the table at the front desk she said, No, I need to see this go in their hands. I promised Karly I would get this cake to the right person’.

“Denise navigated the Nike campus, all while having a sleeping child in one arm and half a sheet cake in the other.”

After delivering the cake, Karly said her job ambitions inspired Denise to make a career switch.

“Delivering the cake that day inspired one person. And maybe this post will inspire more. Helping people realise their potential is what I love to do,” Karly said.

“At the end of the day it’s not about the cake at all. It is about making things happen and taking a chance outside of the box.

“Denise did it. She did whatever it took to help me get that cake to Nike. And that is what I do. This is why I am different than the pack. Because whatever it is, I get it done.”

After going viral with her story, Karly confirmed Nike has since been in touch with her, along with interested employers from other companies.

“I have a few meetings next week, so that’s exciting,” she told TODAY.

“Now that this has happened, there are a bunch of companies that are kind of involved in the process.

“So I’m just trying to figure out where I fit in, what’s the right fit culture-wise, and a company that has a good mission and is doing something great not just within their product, but for other people.”

Aussie traffic controller, 19, dishes all on pay packet: ‘I love it’