‘It was pretty dark times’: NRL ref opens up on grand final mistake 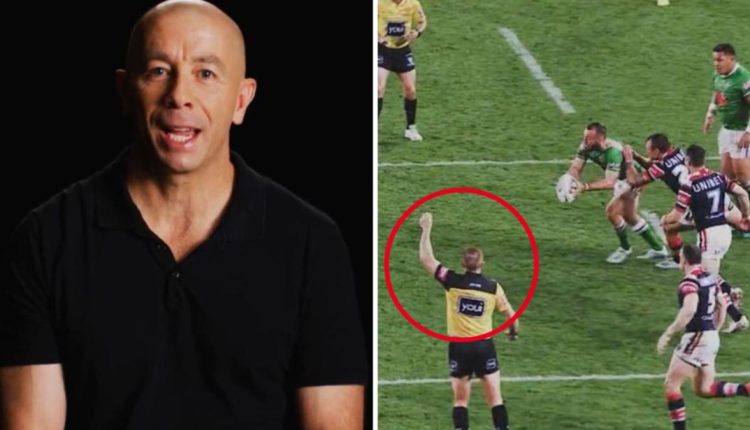 Veteran rugby league referee Ben Cummins has opened up on his infamous mistake during the 2019 grand final, revealing he had negative thoughts about what he wanted to do with his life in the aftermath.

With the scores tied at 8-8 in the second half between the Sydney Roosters and Canberra Raiders, Cummins incorrectly called “six again” when the Raiders recovered an attacking kick off one of their own players.

Watch Cummins’ incredible story in the video above

Canberra five-eighth Jack Wighton grabbed the ball and charged to the defensive line thinking it was the first tackle of the set.

But just as he was tackled, Cummins reversed his call, meaning the Raiders had to hand the ball over.

In the resulting set, Sydney full-back James Tedesco crossed over to give the Roosters a 14-8 lead.

“I realised I stuffed up big time and I tried to correct the call – which would have been the right call,” Cummins said.

“But Jack Wighton didn’t see that and he got tackled and the Roosters get the ball and go down the length of the field in the next set and score.

“I realised then that this was big at eight-all in a grand final.

“It probably doesn’t get much bigger than this.

“I walked into the tunnel and cameras were all on me and I’m thinking this is not normal, this is big. My heart sunk.”

Cummins, who has officiated over 400 NRL games, copped a barrage of abuse in the aftermath, but said it became really hard when his family were also targeted.

“When you sign up to referee at the top level, you know that it comes with fans that are passionate, and people can say things about your performance,” he explained.

“But when it brings in your family and your home, it’s sort of to a different level. I found that really hard.

“My kids handled it pretty well. I won’t say it was easy for them. My son was copping a lot of abuse at school and my daughters (were) online – because they are on social media. That was really tough.

“I basically locked myself in my house for a week and slowly ventured out the week after.

“It was pretty dark times. I didn’t want to talk to anyone about it. I had some thoughts about what I wanted to do with my life and they were pretty negative.

“You feel ashamed and worthless, embarrassed. I wasn’t sleeping. I just wanted everything to go away.”

Cummins’ revelations about his mental struggles came on the same week the league was rocked by the sudden death of former player and coach Paul Green.

The hilarious $10,000 act that sums up why Paul Green’s mates loved him