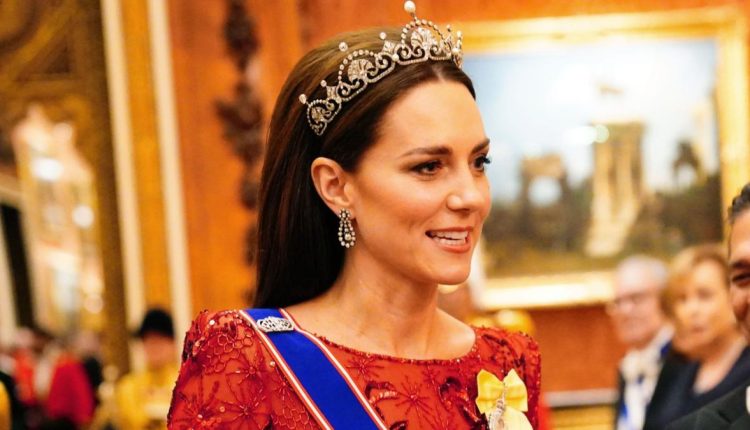 Catherine, Princess of Wales stunned at King Charles’ annual Diplomatic Reception at Buckingham Palace, wearing a tiara for the second time in weeks.

Kate hasn’t been seen with the jewelled accessory on her head for the last three years, but it appears times are changing.

WATCH THE VIDEO ABOVE: Princess of Wales’ ‘breathtaking’ new look at palace banquet.

She paired the dress with the Lotus Flower tiara, previously owned and worn by the Queen Mother and the Dame Grand Cross of the Royal Victorian Order star and sash.

This is the second time the princess has worn the headwear – she was previously seen in the piece at the state banquet for Chinese President Xi Jinping in 2015.

Queen Elizabeth, the Queen Mother – Prince William’s great-grandmother – created the Lotus Flower Tiara out of a necklace that was a wedding gift from her husband, King George VI, The Court Jeweller reports.

The Diplomatic Reception was held for the first time since 2019 and saw the British royals united, with attendees including Charles and Camilla, Queen Consort.

Camilla dressed in black and re-wore the jewellery she was seen in at the state banquet last month.

The sapphire and diamond tiara Camilla wore was one her late mother-in-law, Queen Elizabeth, also wore for a 2015 state visit.

While it was business as usual at Buckingham Palace, Prince Harry and Meghan, Duchess of Sussex touched down in New York for an upcoming red carpet appearance.

The Sussexes are attending the 2022 Robert F Kennedy Human Rights Ripple of Hope Award gala, where they and other “exemplary leaders” will be honoured for their “unwavering commitment to social change”.

The trip comes just days before the first drop of their Netflix series Harry & Meghan, set to “tell our side of the story” regarding their departure from the British royal family.

Fans reacting to new photos of Catherine at the reception in London could not help but point out the reappearance of a tiara hours before the Sussexes are set to dazzle themselves on the red carpet.

“Interesting timing to bring the tiara out, I see what you’re doing,” one fan wrote on TikTok.

“Catherine reminding Meghan and Harry who the future Queen of England is,” added another.

Another wrote that the “crown says it all, the message could not be clearer. She looks amazing though.”

Along with these comments, Catherine’s outfit was once again praised as “dazzling”.

“Catherine’s hair this evening with THAT tiara is perfection,” a tweet said.

“Princess Catherine wears The Lotus Flower Tiara The lotus flower is a symbol of rebirth and strength,” wrote another.

A tweet said that “Catherine has simply done it again!”