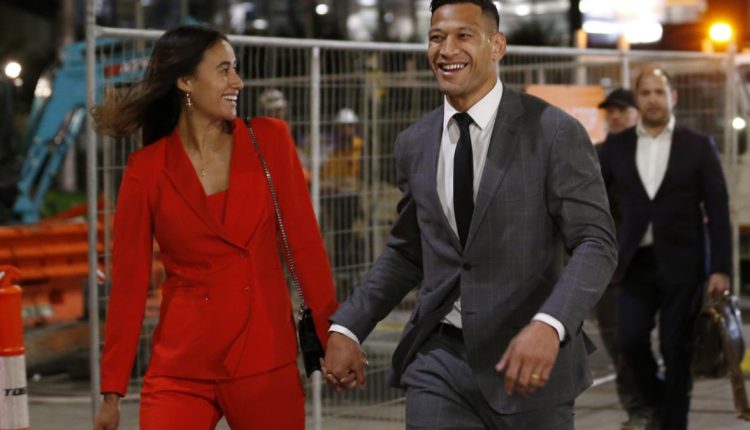 The wife of former Wallabies and NRL star Israel Folau has taken to social media to blast Australian Rugby League Commission chairman Peter V’landys in the wake of the Manly pride jersey saga.

Maria Folau, a former New Zealand netball star, accused V’landys of being a hypocrite in a scathing attack on Instagram.

Watch the latest on the Sea Eagles in the player above

“The game prides itself on treating everyone as a human being, no matter what their race, colour or sexual orientation,” he told Sydney radio station 2GB.

“We’re all human beings at the end of the day.

“Rugby league is the greatest game for all. It’s inclusive.

“But at the same time you have to respect people’s religious beliefs and cultural beliefs. Those players are taking a stand and they’ve got every right to – they’ve got freedoms to do so.”

Israel was sacked by Rugby Australia in 2019 for posting religiously motivated homophobic messages on social media, but his wife Maria suggested V’landys accepting the stance of the Manly seven was hypocritical.

“We’re all human beings at the end of the day … umm so what’s Izzy??….a donkey,” Maria wrote on Instagram.

“The hypocrisy (sic) from this man and this organisation @nrl #PeterVlandys What a joke!!!”

V’landys has never officially knocked back an application by an NRL club to register Israel, although he did deliver a scathing assessment of his posted views back in 2019.

“The game is inclusive. Israel’s comments are not inclusive,” he said.

“With due respect to Israel, what he says, young kids listen to. He is a role model. They act on it.

“And when you’re a kid at school and you get bashed up because you’re different, I don’t think that’s a good thing.”