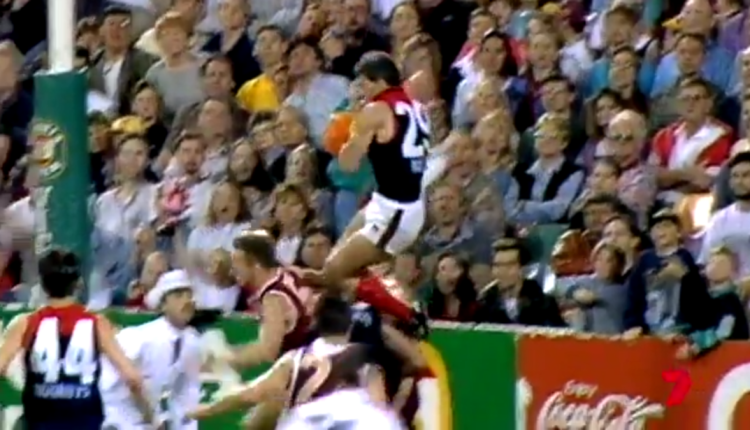 It was only natural that Shaun Smith, the former AFL star known for taking the mark of the century, spent 11 years literally flying high at the code’s top level.

But now the former Melbourne Demons player has revealed to 7NEWS Spotlight he is struggling to get up from rock bottom, as he continues to battle what he believes is chronic traumatic encephalopothy, or CTE, the degenerative brain condition rocking contact sport around the world.

WATCH THE VIDEO ABOVE: The severity of head trauma in contact sport.

“That was one of the features I had in my game – my leap, the marking and then the timing, all that sort of stuff,” Smith told Spotlight’s Michael Usher as he recalled the famous 1995 mark taken against the Brisbane Lions.

“I had a fair crack during my career and landed on my head a few times, which wasn’t real flash.

“I got whacked a fair bit as well.”

Those blows to his head not only damaged him – they changed him. Now Smith is convinced he is living with CTE, a degenerative brain condition believed to be responsible for early on-set dementia in a number of former athletes in contact sports.

They include hard-hitting former rugby league star Mario Fenech, who told Spotlight’s groundbreaking report into the biggest issue in Australian sport how he forgot his own son’s wedding.

“Gradually the neurons wither away in the brain,” she said.

““Over time, people get worse and eventually they end up needing care and dying from it.”“

From top of the AFL to rock bottom

Its insidious effects include irrational anger, mood swings and suicidal thoughts. A situation all too familiar to Smith.

“Yeah. Thoughts of jumping in front of a train,” he said.

Smith made headlines in 2020 after he received a $1.4 million insurance payout in recognition for how he had suffered “total and permanent disablement” due to the blows to the head he sustained during his career with Melbourne and North Melbourne.

But the landmark ruling only came after he nearly lost everything, and he now believes the changes in his behaviour due his head knocks go back decades.

“At one stage there I was sleeping in my car. I (didn’t) know where to stay, just a lost soul.

“Getting into trouble, getting arrested, which is not me.

“But I was finding myself just getting angry at the drop of the hat … from zero to nuclear.”

While CTE currently can only be diagnosed after death through brain analysis, Smith has undergone a magnetoencephalography (MEG) scan and, unfortunately, the results were not a surprise to the 53-year-old.

“It just adds up what’s wrong with my brain,” he said.

“The areas of the brain (that) were for behaviour, that frontal lobe stuff. There’s some significant damage there.

The US neuroscientist and former professional wrestler has been at the forefront of research into CTE in the NFL and other sports.

Even more concerning is the fact Nowinski now believes the rising number of female athletes involved in contact sports such as Aussie Rules, rugby league and boxing could be at even more risk of the degenerative brain condition in years to come.

“There’s evidence to suggest that women may be more vulnerable to CTE going forward,” he said.

“Women have thinner necks and less musculature to slow their brain down when they get hit in the head.

“The signal that we should pay attention to is they’re getting more concussions and they’re taking longer to recover.”

While former Australian rules footballers such as Danny Frawley and Shane Tuck have already donated their brains to the Australian Sports Brain Bank for further CTE research, the first donation by a female contact sport professional made for grim reading.

Researchers last year detailed how the brain of AFLW player Jacinda Barclay, who died in 2020 aged 29, had a degradation in her cerebral white matter – which has previously been associated with contact sports.

‘Everything just went dark for a second’

Boxer Kate Mclaren, one of the growing number of young women involved in contact sports, has suffered her first real concussion.

“One punch just came at me, bang, hit the canvas,” said the boxer, who is coached by Mario Fenech’s pal, fighting legend Jeff Fenech.

“Yeah, it was, it was scary to tell you the truth.

“I just remember everything just went dark for a second and then I saw gold stars and then I remember trying to get up but you’re completely off balance.”

Mclaren said her instinct was to get back up and finish the fight, but her coach wasn’t exactly as keen about it.

“Some of these girls (who) fight, they’re amazing,” said Fenech, who dealt out 21 knockout wins during his 23 years inside the ring.

“You look at the ladies who play rugby league today … they tackle the same as a man, they put their head in the same position, in the wrong position.

“We need to, I don’t know, get prepared for this. Be ready, you know?”