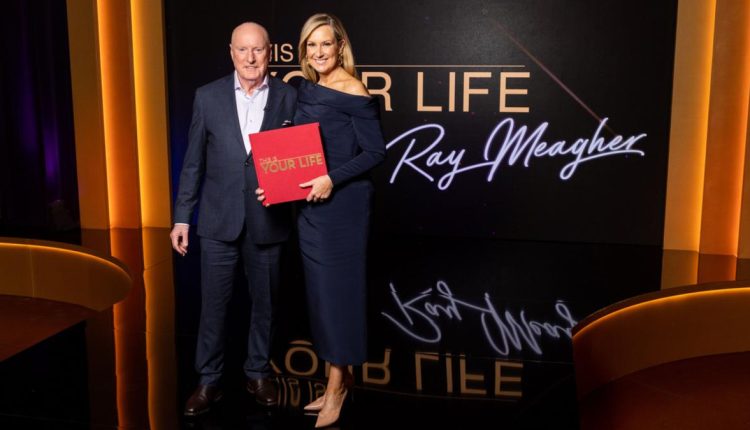 He’s a Gold Logie winner, a Home and Away icon and one of Australia’s best-loved TV personalities.

Now Ray Meagher is the subject of a new episode of This Is Your Life, with host Melissa Doyle.

WATCH THE VIDEO ABOVE: Sneak peek of This Is Your Life with Ray Meagher

Chris Hemsworth, Dannii Minogue, Kate Ritchie and Bec Hewitt are just some of the celebrities who will pay tribute to the TV icon in an all-new episode at 7.30pm on Tuesday, October 11 on Channel 7 and 7plus.

Melissa Doyle will surprise Ray with the iconic big red This Is Your Life book on the set of Home and Away, before a night of laughs, tears, surprises and insights into a man who has touched the lives of many people throughout the years.

Summer Bay colleagues past and present will reveal the incredible impact working with Ray has had.

In a tearful reunion, Kate Ritchie describes how, in her 20 years growing up on Home and Away, Ray became a true friend and helped shape her into the woman she is today.

The nostalgia continues as This Is Your Life delves into Ray’s career in film and theatre – revealing how he got his first big break playing the rear end of a horse (yes, you read that correctly).

In a heart-warming moment, Ray talks about growing up as an orphan before viewers meet his beloved surrogate mum, Pat, who helped raise him.

Also speaking publicly for the first time is Ray’s wife, Gilly, and stepdaughter, Rebecca, who share stories about his life away from the spotlight.

Ray Meagher, This Is Your Life premieres 7.30pm Tuesday October 11 on Channel 7 and 7plus.