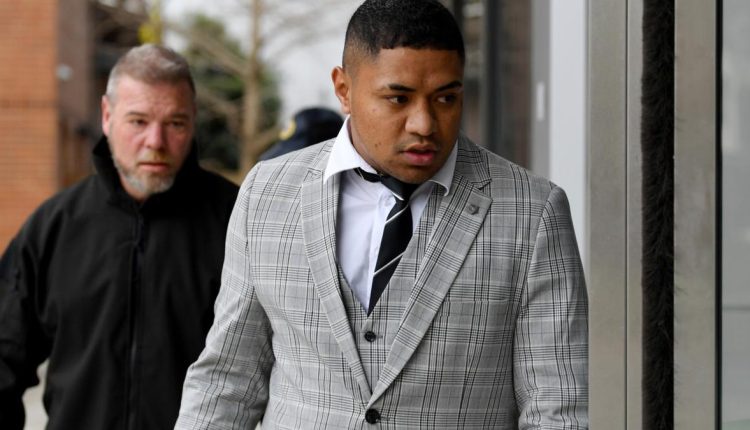 Former NRL rising star Manase Fainu has been jailed for at least four years and three months for stabbing a church youth leader outside a Mormon charity event in Sydney.

The former Manly Sea Eagles hooker was found guilty in August of wounding Faamanu Levi with intent to cause grievous bodily harm at Wattle Grove late at night on October 25, 2019.

WATCH THE VIDEO ABOVE: Manase Fainu jailed for stabbing but set to appeal.

In his evidence to the Parramatta District Court jury, he denied being the stabber, saying when he heard “knife, knife” he ran away scared for his own safety.

The jury took about two hours to deliver its verdict.

Judge Nanette Williams on Friday jailed him for eight years with a non-parole period of four years and three months.

The judge found no evidence of remorse but said he had good prospects of rehabilitation.

His barrister Margaret Cunneen SC previously said Fainu would appeal “the perverse verdict in view of the evidence”.

One witness testified to seeing Fainu plunge a steak knife into the back of Levi in the car park brawl, referring to him looking angry and wearing a sling.

The jury was told the footballer had recently undergone shoulder surgery and had his arm in a sling that evening.

The stabbing occurred after an earlier fight on the dancefloor of the alcohol-free charity event organised by the Church of the Latter Day Saints.

The jurors were told Fainu and a friend known as ‘Big Buck’ were involved in the fight and ushered outside by Levi, who told them not to fight on church grounds.

CCTV footage showed Fainu with a white towel draped over his head and his four friends jumping back over a fence and into a car park where the brawl occurred with Levi.

He told the jury the white towel draped over his head was a “security blanket” doused in cold water because he had a headache, not to hide his identity.

In unsuccessfully applying for him to remain on bail after the verdict, Cunneen said her client had experienced severe mental illness including depression, anxiety and suicidal thoughts because of the trial and verdict.

She said he had been considered a highly promising rugby league player in 2018 who was on track to earn a massive salary to support his parents and eight surviving siblings.

This was all stripped away once he was charged, due to the National Rugby League’s no fault stand down policy.

“This is a man who has suffered a most enormous downfall, an unthinkable downfall in what he may have expected in 2019,” she said.