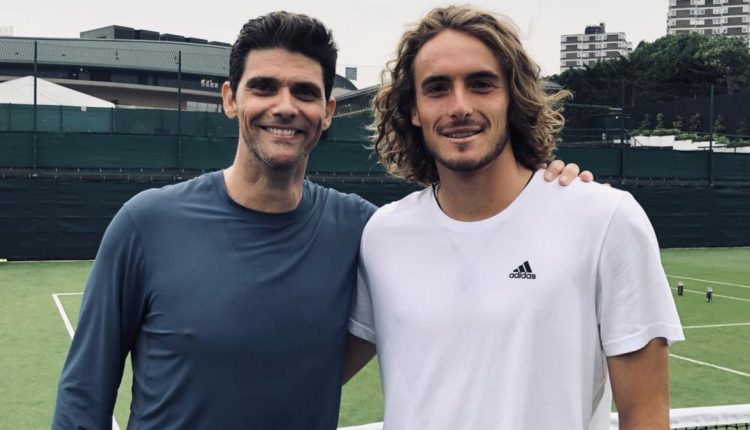 Philippoussis has been a constant, calming presence in the Tsitsipas box throughout the Greek ace’s charge to a fourth semi-final at Melbourne Park in five years.

WATCH THE VIDEO ABOVE: Mass BBL confusion in Renegades’ clash with Strikers.

Already armed with all the shots in the game, Tsitsipas isn’t leaning on Australia’s one-time world No.8 and two-time Davis Cup winner for serving tips or tactics.

Instead, Philippoussis has been tasked with easing tensions between the world No.4 Tsitsipas and his volatile coach-father Apostolos.

Since joining Team Tsitsipas after the 24-year-old’s tempestuous third-round Wimbledon defeat to Nick Kyrgios last July, Philippoussis’ appointment has been working a treat.

It’s no secret Tsitsipas’s oft-overbearing dad has led to his son unravelling on court several times, most infamously during last year’s Australian Open semi-final loss to Daniil Medevev after Apostolos was caught coaching from the box – before it was legalised in men’s tennis.

Now it’s Philippoussis’s mind coaching that has Tsitsipas believing he can finally go all the way and snare a maiden grand slam crown in Melbourne, two years after blowing a two-set lead in the French Open final against Novak Djokovic.

“The reason Mark is part of the team is because the dynamic has showed that it’s good,” Tsitsipas said ahead of Friday’s semi-final with Russian Karen Khachanov.

“There hasn’t been any friction. It’s been going well. We get along well, all of us. We understand each other.

“There’s never misunderstandings or things that lead to conflict. I’m enjoying this.

“I’ve been enjoying this even in 2022. He makes for a good guy to have next to my father that can advise him, that can help him, can help me.

“Hopefully I can help him as well through experience, vice versa.”

Tsitsipas has rarely looked in better touch in Australia, unbeaten in nine matches this summer, and is the highest-ranked player left in the men’s draw at Melbourne Park.

“I’m feeling great with my tennis. I don’t think I felt so good in a long time. I will definitely say,” the fourth seed said.

“I’ve said it, I’m a different player, playing different. My mentality is different. When I’m out on the court, I don’t really think of negatives, to be honest. I just go out there and play the game.”