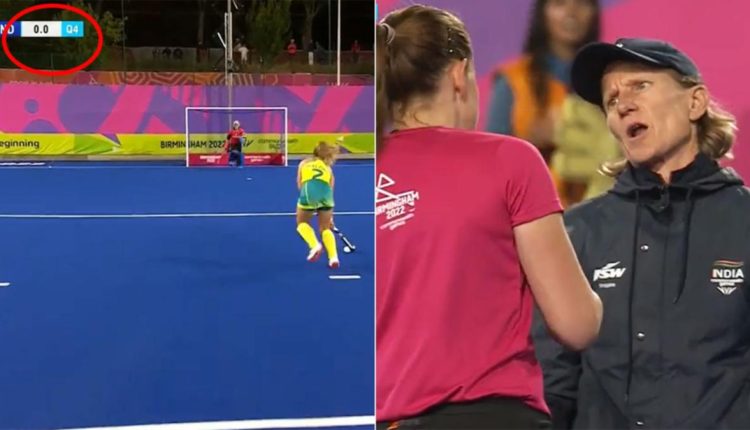 A controversial penalty shootout blunder has helped Australia sink India to advance into the women’s hockey gold medal match at the Commonwealth Games.

After scores were locked 1-1 at fulltime in Friday night’s semi-final, the Hockeyroos triumphed 3-0 in the shootout.

You can watch the controversial play in the video above

After Rebecca Greiner scored in the 10th minute, the Hockeyroos held sway until a late India leveller with just 11 minutes remaining in the semi-final.

And so, the match went to a nail-biting penalty shootout, which began in a blaze of controversy.

But in a baffling clanger, Malone was gifted a second attempt because the eight second countdown clock on the scoreboard hadn’t been activated.

“When they called the retake, I was thanking the universe for a second chance,” Malone said.

“I knew all of India would hate me if I put it in.

“But I was just trying to think about my team and that final and I said to myself ‘if I get a second chance at this, I’m not missing it’.

“I felt for India at the time. But all our other girls got our shootouts in so it’s not like that one shootout was the be all and end all.”

Malone converted her second attempt and her teammates Kaitlin Nobbs and Amy Lawton also scored, before the Hockeyroos’ penalty expert goalkeeper Jocelyn Bartram, who was brought on for the shootout, refused to let the rattled Indian players score.

Channel 7 commentator Alister Nicholson slammed the farcical passage of play that changed the course of the outcome.

“The clock may not have started, but it was perfectly obvious that Rosie Malone was not scoring,” he said in commentary. “That is embarrassing. “That would be a national outrage if that happened to Australia.”

EVERY EVENT: Check out the full Commonwealth Games schedule

MEDAL TALLY: Every gold, silver and bronze at Birmingham 2022

LATEST RESULTS: Detailed breakdown of every event at the Games

“It’s the most incredible way to win; most heartbreaking way to lose,” she said on Channel 7.

Well after the result was in the books, Nicholson and Parker were still trying to process what had just taken place.

“Your heart is still racing, having witnessed what took place,” Nicholson said after the match.

“We’d only just got over the first semi-final that went to a shootout.

“That decision to award a retake; that’s going to take a lot for India to digest. I know Australia was very clean in the aftermath of that, but there’s a psychological difference.

“I mean, how on earth could you not start the clock? That is absolute amateur hour.”

Parker agreed, but said India needed to put it behind them, and they failed to do so.

“But it happens, and India had to regroup and regather, and they didn’t.”

Elsewhere, England also secured their spot in the final with 2-0 shootout triumph against New Zealand after a scoreless stalemate, setting up a mouth-watering final between the two leading countries on the gold medal tally.

Sunday’s final will be the third time Australia have met England in the gold medal match – the Hockeyroos have won both and have four Commonwealth titles in the six completed editions of the Games.

In Friday’s semi-final, the Australian exacted a semblance of belated revenge on the Indians for knocking them out of last year’s Tokyo Olympics at the quarter-final stage.

The Australians suffered an early blow when defender Karri Somerville was forced off seven minutes in when copping a nasty ricochet on her right cheekbone.

But just three minutes later, the Hockeyroos struck when a Mariah Williams darted along the left flank and launched a slick cross which was neatly deflected in by Greiner at the far post.

India almost squared scores nine minutes into the second quarter when Sangita Kumari found space inside the attacking circle and shot, but Australian goalkeeper Aleisha Power instinctively blocked the attempt with a reflex left-footed save.

The Australians continued to press for a second goal in the third term but went unrewarded despite a period of sustained attack punctuated by four consecutive penalty corners.

The scores remained 1-0 at the last change with Australia chalking up 22 attacking circle entries to just seven from India.

Early in the final quarter, Stephanie Kershaw sliced through India’s midfield and launched, only for her shot to be saved.

And against the flow in the 49th minute, India equalised when Vandana Katariya deflected into the net from close-range – the first goal the Australians conceded in the Games.

Just like Tokyo 2020 on Seven, there will be one destination to watch every epic feat, every medal moment, every record attempt and every inspiring turn from the Birmingham 2022 Commonwealth Games.

7plus is the only place to watch up to 30 live and replay channels of sport, see what’s on when, keep up to date with the medal tally, create a watchlist to follow your favourite events and catch up on highlights.

In the video below: Aussie high jumper reflects on devastating injury