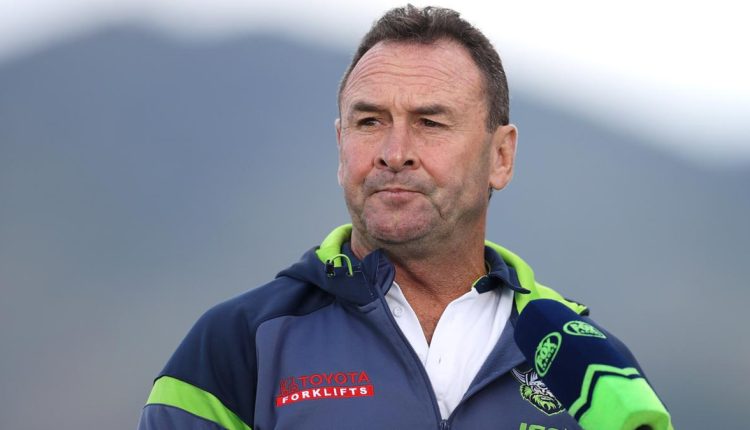 Canberra Raiders coach Ricky Stuart has been suspended for one match and fined $25,000 for his “weak-gutted dog” comment about Penrith’s Jaeman Salmon.

Stuart apologised after making the comments in a post-match press conference, claiming he was speaking as a father and not as a coach during the outburst.

The feud is believed to be related to a dispute from more than a decade ago, when Salmon and Stuart’s son played football in the same team in a Cronulla junior competition.

The issue boiled over again when Stuart was asked about Salmon appearing to lash out with his foot in a tackle, with his boot connecting with Raider Tom Starling’s groin and face.

Stuart’s comments in Canberra came as emotions ran high, with the Raiders’ 26-6 loss to the Panthers leaving them in a struggle to make the NRL top-eight.

Stuart has been fined more than $100,000 throughout his coaching career.

“It’s a very public job and it’s a hard job. He’s obviously very disappointed and he’s embarrassed and he’s just going to have to put it behind him and move on and we’ll all support him,” he said on Tuesday.

Raiders captain Elliott Whitehead says the club will rally around Stuart and get on with keeping their season alive.

Overshadowed by the storm over Stuart’s comments has been the fact the Raiders’ season is teetering on the brink, one game and considerable point differential back from the eighth-ranked Sydney Roosters with four games to play following their loss to the Panthers.

In a week dominated by unwanted headlines about their coach, Whitehead said his players stood by him.

“We’ve got his back, he had his reasons,” Whitehead said on Tuesday.

“I’m not going to go into them but we’re all supportive of Ricky and he knows he probably shouldn’t have said it on that platform.

“He’s upset he let his emotions get the better of him.”