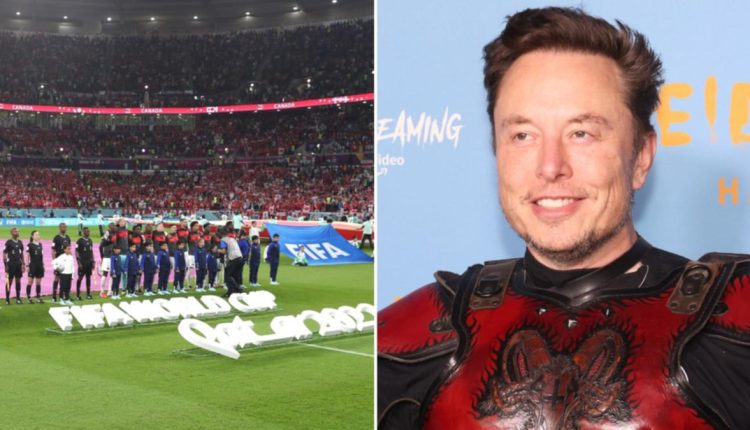 Twitter owner Elon Musk isn’t worried about the barrage of criticism he’s receiving from unhappy users of the social media platform who think the mogul is blowing it up.

Among a number of changes coming into effect under his watch, Musk is set to charge users $8 per month to maintain a verified blue “tick” status which, until now, has always been handed out free.

WATCH THE VIDEO ABOVE: Canada ‘robbed’ of two penalty chances against Belgium.

There was a belief that, disgruntled with Musk’s new regime, Twitter users would boycott the social media platform out of spite, causing global usage to plummet.

It has had the opposite effect, according to Musk who has been regularly spruiking the “all-time high” numbers Twitter is reportedly experiencing.

On Thursday morning (AEDT), Musk revealed an incredible statistic to his 118.5 million followers, based on Twitter usage related to the FIFA World Cup.

German players covered their mouths during a pre-game photograph on Wednesday in a blunt message to FIFA for silencing human rights debate at the Cup in Qatar.

“It was a sign from the team, from us, that FIFA is muzzling us,” Germany coach Hansi Flick said.

Germany’s Interior Minister Nancy Faeser, who is also responsible for sports, wore a OneLove armband in the grandstand while sitting next to FIFA president Gianni Infantino.

Fans have been banned from entering Doha stadiums while wearing rainbow colours signifying support for same-sex relations, which are illegal in Qatar.

But Faeser wore the armband under a pink blazer which she took off during the game.

FIFA threatened the captains of seven European nations with yellow cards if they carried through on pre-tournament plans to wear OneLove armbands.

The move infuriated the nations and human rights groups and followed Infantino labelling Western nations as hypocrites for criticising Qatar.

Denmark on Wednesday vowed not to vote for Infantino when he stands for re-election as FIFA president next year.

“We are not in a position right now to decide that, we don’t have to,” Johnson said.

“At this stage I understand that it is only President Infantino (who) will run. He will be running (unopposed) so I am not sure that there will be a decision to make.

“But in the event there was a contested election, we would ask the candidates what their vision is.”

Governments of some nations have boycotted the Cup but Australia’s Sports Minister Anika Wells has held talks with the Qatari government since last Sunday.

“We believe in open dialogue and we believe that we need to show up to have it,” Wells said on Wednesday.

“So I showed up to take Australia’s seat at the table again and to have that open dialogue.

“There was no need for me to make clear to the Qatari government the Socceroos’ video, obviously that had been broadcast around the world.”

“On behalf of the Australian government I made clear … we acknowledge the progress that has been made,” she said.

“There is more to be done but I really feel like we had a constructive, frank discussion about that … I was quite surprised by how humble, honest and constructive they were about it.

“I conveyed to them what has been made very clear to me in Australia, which is that Australians want to see more done … I put that in the broader context of that is the case for all of us, we could all do more to advance human rights.

“And that this global scrutiny will turn itself upon us in July next year (when) we host the Women’s World Cup.”

“People talk about the hypocrisy of these issues (in Qatar) but not talking about ones that happen at home,” Irvine said.

“I hope that’s something we continue to explore in future as part of our growth as a team and as individuals. That is something to look at moving forward.”