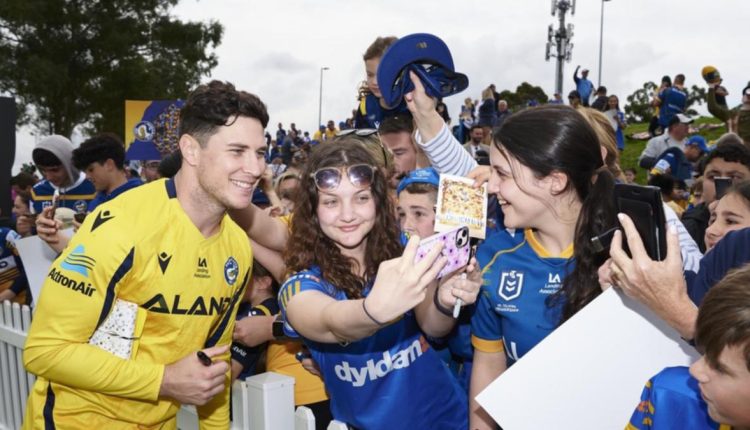 Mitch Moses has revealed how he told coach Brad Arthur he couldn’t let teammates down when he missed the birth of his first child to pursue a lifelong dream of ending Parramatta’s NRL title drought.

Moses admitted on Monday he was entering the biggest game of his life with considerable weight lifted from his shoulders, after a week in which he not only became a father but attended his grandmother’s funeral.

The Parramatta halfback had last Thursday travelled to Townsville to play North Queensland with his baby girl not due until this week, believing he would be able to return in time.

However, the situation changed quickly on Friday, when Moses was told partner Bri had gone into labour and the birth was likely imminent.

Forced to decide whether to dash back to Sydney in the faint hope of making it in time for the birth, or stay in Townsville for the preliminary final, Moses ultimately stayed with his team and witnessed the delivery via FaceTime.

“Brad (Arthur) said, ‘What are you doing? What are you still doing here? Get out of here’,” Moses recalled.

“And I just looked at him and said ‘I can’t. I can’t leave these boys here’.

“How hard we’ve worked all year and obviously I would have loved to be there for my first daughter but it’s just how it happened.

“I got to share a moment on FaceTime with the family and (see) how she was born.

“It was just a rollercoaster of emotions last week and (I’m) happy the week is over. So, now we can focus on the big dance.”

Moses said Bri was not best pleased about the timing, but she understood his predicament.

The halfback also admitted his relief that the birth came before he entered the field, even if the emotion lingered on his mind throughout the 24-20 win over North Queensland.

“She was a bit a bit filthy at the start when she got put in and said this is how it’s gonna happen,” Moses said.

“She was a bit filthy. But she understood. She’s supported me through everything.

“She’s seen how much work I put in this year to be in the position that we’re in.

Hopeful his daughter and partner can attend the grand final in a suitable viewing box, Moses knows there would be no greater way to cap his wild fortnight than for Parramatta to win their first title in 36 years.

Claiming he was reasonably well rested despite the past few days, Moses has waited since his years as a childhood Parramatta fan to see the Eels win a premiership.

Like every other player, he was not alive for their last one in 1986.

And for now, the Eels’ hopes rest largely on his boot.

He was Parramatta’s best when he kicked the Panthers to submission in round nine with 777 metres, making Penrith regularly return the ball out of their own end.

On that night he arguably outplayed Nathan Cleary, something that will need to be done again for Parramatta to stand any chance of claiming the title.

“He’s the best halfback in the game. There’s no hiding that,” Moses said of Cleary.

“His last two performances … he’s been on fire and pretty much carried them.

“I grew up in the area and have never seen a grand final won by Parramatta.

“For me to be the halfback and to lead them to win a comp would be unbelievable.”