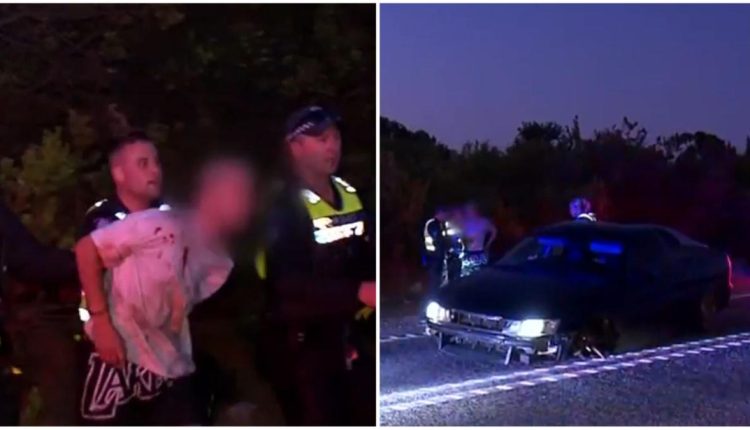 A man has been charged over a dramatic, high speed police chase which started in Perth and ended about 70 kilometres away with the accused being tracked down, in bush, by the canine unit.

A pursuit of the black ute, which had stolen number plates, tracked north to Gingin, before heading west along Gingin Brook Road where police had set up a tyre deflation device, hoping to finally bring the chase to an end.

But even after stingers punctured the car’s front left tyre, police claim the driver did not stop and instead continued the high-speed getaway attempt to Indian Ocean Drive where he turned south.

Eventually, the car’s tyre “disintegrated” and the vehicle came to a rolling stop in Wilbinga, just north of the Shire of Wanneroo.

“The driver allegedly fled on foot and was apprehended nearby by a Police Canine Unit,” police said in a statement on Thursday.

Police air wing vision, also released Thursday, showed a driver jump from a car as it rolled to a stop, before attempting to flee into bush.

You can check out the police vision in the player below.

A 25-year-old Bicton man has been charged with reckless driving to escape pursuit by police, no authority to drive and failing to comply with a direction to stop.

He will appear in Joondalup Magistrates Court on Thursday.

Police said a female passenger, 21, also fled on foot before being taken into custody.

She has not been charged.