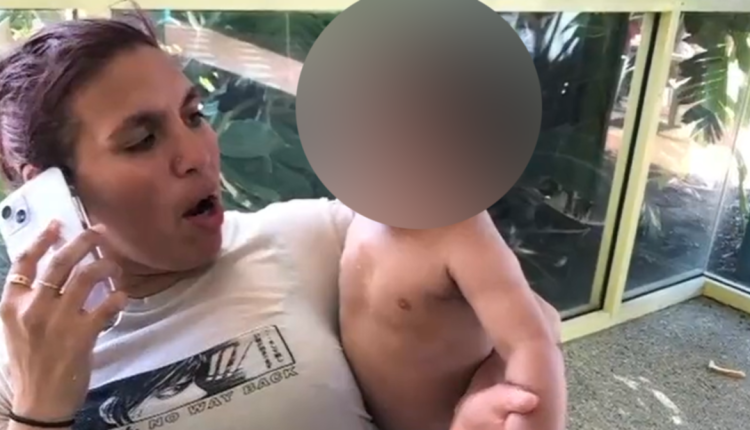 A pregnant mother and her unborn baby have died just days after she was hit in the head at a shopping centre in Perth’s south.

Diane Miller, 30, was hit in the head with a piece of concrete when a brawl broke out in the car park of a Karawara shopping centre on Manning Road on Tuesday night.

Miller’s brother confirmed the devastating news on Thursday evening, after the family said their final goodbyes.

“We just lost our world… the baby passed away too.”

Miller was five months pregnant and also has a young son named Lloyd.

The incident took place when a brawl broke out and a 17-year-old man allegedly threw a concrete object at the car, which went through the open front passenger window and hit Miller in the head.

The impact caused her to go into cardiac arrest. She was taken to hospital and placed in intensive care.

A 17-year-old male from Kensington was later charged with grievous bodily harm and breach of bail.

Miller’s heartbroken family told 7NEWS earlier in the week they were “destroyed” upon visiting her in hospital.

“He’s going to grow up without his mum now,” Clifto said.

“We are destroyed and we want justice. You wouldn’t wish this on anyone.”

Police described the incident as “senseless” and “unprovoked”.

Police have alleged there was an argument involving a group of teenagers and Miller’s partner, who had been driving the car.

“From what we can gather, the woman was a passenger in a car that was stopped in the car park,” Inspector Brett Baddock of the Cannington District Office said.

“Her partner then became involved in the scuffle … The parties were not known to each other.

“This is, quite simply, senseless violence by a bunch of teenagers.

“From what we can gather, it’s unprovoked. I think they’ve gone out looking for trouble and they’ve found it.”

The investigation is ongoing and anyone who witnessed the incident or has dashcam or mobile video of the carpark during that time period is asked to contact Crime Stoppers on 1800 333 000 or report online via www.crimestopperswa.com.au.

Breakthrough after father and son shot dead outside Sydney home