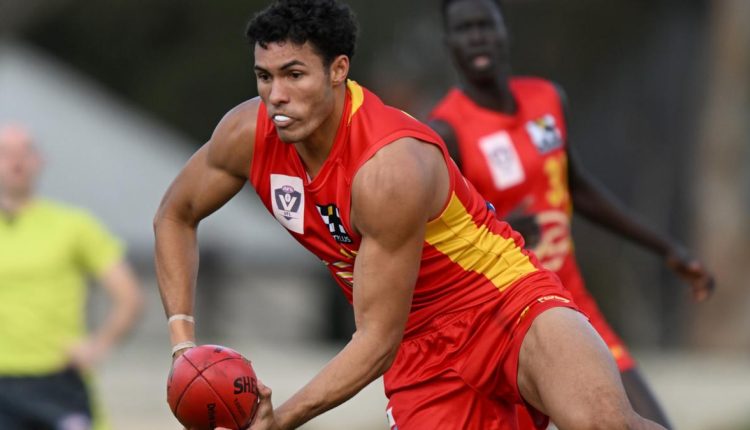 Recently delisted Gold Coast player Patrick Murtagh is one of 45 athletes from 13 countries who have been invited to the National Football League (NFL) International Combine in London.

But Murtagh – who has an impressive vertical leap and was a state decathlon champion before joining the AFL – is trying his hand at something a little different to the AFL’s American football pioneers.

WATCH THE VIDEO ABOVE: AFLPA CEO Paul Marsh speaks to 7NEWS about the Hawthorn racism scandal.

The NFL is back on the Screens of 7. Watch games Live and Free every Monday on 7mate and 7plus >>

Whereas former AFL players such as Darren Bennett, Ben Graham, Saverio Rocca and more recently Arryn Siposs, have broken into the NFL as punters, Murtagh is aiming to use his athletic versatility as a ‘tight end’.

The tight end is a hybrid position and plays as a pass catcher and an offensive lineman, so he needs speed and size.

Murtagh was drafted in 2019 out of the Gold Coast academy after showing plenty of promise as a mobile forward/ruck in the that year’s Academy series. He also plays as a key defender.

He was delisted by Gold Coast mid September after failing to appear at senior level, but at 196cm and 98kgs, he has the size, versatility, and athletic ability to make it as a tight end.

The combine aims to discover talent from around the world and participants will go through a series of tests in front of NFL evaluators at Tottenham Hotspur Stadium on October 3-4. Selected athletes will then enter the NFL’s International Player Pathway (IPP) program, which could ultimately lead to a spot on a NFL roster.

Following the international combine, a select number of athletes who meet specific performance requirements will be invited to train in the US for three months.

Jakob Johnson and Jordan Mailata are some of the NFL players who have come through this program.