Dead man’s legs left sticking out of woodchipper to look like an accident, court told 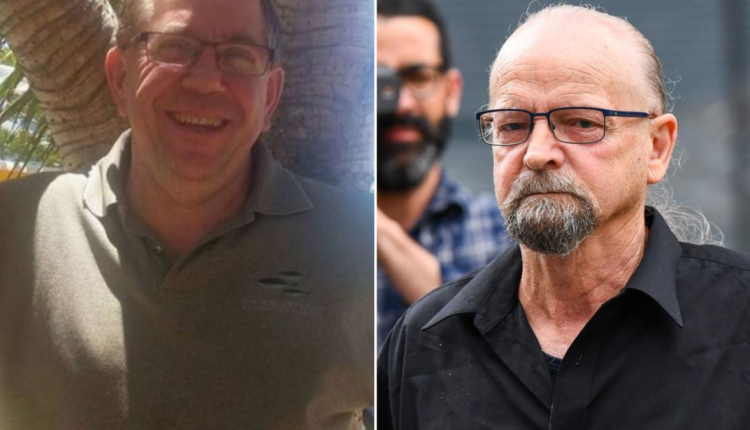 While feeding Bruce Saunders into a woodchipper, Peter Koenig ensured his friend’s legs were exposed so it looked like an accident, a court has heard.

Koenig has given evidence on Wednesday against Gregory Lee Roser, 63, who is on trial for the murder of Saunders, 54, on a property north of Brisbane in November 2017.

The court heard Sharon Graham, 61, asked Roser and Koenig to kill Saunders and make it look like an accident in a bid to claim her ex-partner’s $750,000 life insurance policy.

The jury has been shown police footage of Saunders’ legs protruding from a woodchipper at the Goomboorian property near Gympie, where he had been clearing trees with Roser and Koenig.

Roser killed Saunders by repeatedly hitting him with a metal bar before they both carried the body to the nearby chipper, Koenig told Brisbane Supreme Court on Wednesday.

Koenig said he used a branch to push Saunders into the machine but decided to stop with the legs still sticking out so it appeared to be an accident.

“Just to leave a bit of Bruce there I suppose … for the police to see it,” Koenig, who pleaded guilty in June to being an accessory after the fact to murder, said.

Koenig told the jury he couldn’t ring triple-0 because his hands were shaking but Roser was able to call Graham before handing him the phone.

Koenig agreed he told Graham: “Bruce is no longer with us, job’s done.”

Koenig said Roser then began screaming “something like … ‘Oh Bruce, what have you done’,” in a move he believed would make neighbours think there had been an accident.

Koenig said Roser told him they would have to get their “story straight” before police arrived.

At first Koenig did not believe Saunders would die, saying it was not the first time Graham had asked him to kill a man for money.

He said Graham told him to murder another ex-partner, Barry Collins, earlier in 2017 and “make it look like a truck accident”.

Asked why, Koenig said: “Because he had a lot of superannuation money, she was the beneficiary to it.”

“I just agreed with it to keep her happy (but) no (didn’t do anything) – he is still alive today,” Koenig told the jury.

He said he also refused to kill Saunders, who he considered a friend.

He was hopeful Saunders would not die after they had finished clearing trees on the property for a third straight weekend.

“I thought ‘Beauty, it’s not going to happen’,” Koenig said.

But as they walked up to the property’s house, Koenig said he noticed Saunders fall to the ground.

“I turned around and he (Saunders) was lying on the ground on his back with his eyes opened a little bit … he was twitching,” he said.

“Greg was there with a bar and struck (Saunders) a couple more times in the head.

Koenig said he helped carry Saunders to the chipper because Roser could not do it by himself due to a bad back.

He agreed he owned the metal bar and put it back in his truck afterwards.

Koenig said he had been in an intimate relationship with Graham, who was dating Roser at the time of her ex-partner Saunders’ death.

At the trial, Graham has been accused of being in a “love quadrangle” with Roser, Koenig and Saunders, plotting the latter’s murder for months.

Graham has pleaded not guilty to Saunders’ murder but a Brisbane Supreme Court judge on Tuesday ordered she be tried separately from Roser.

Koenig denied he murdered Saunders because he had been “obsessed and infatuated” with Graham for more than 10 years.

“I did not kill him,” Koenig told Roser’s barrister Lars Falcongreen.