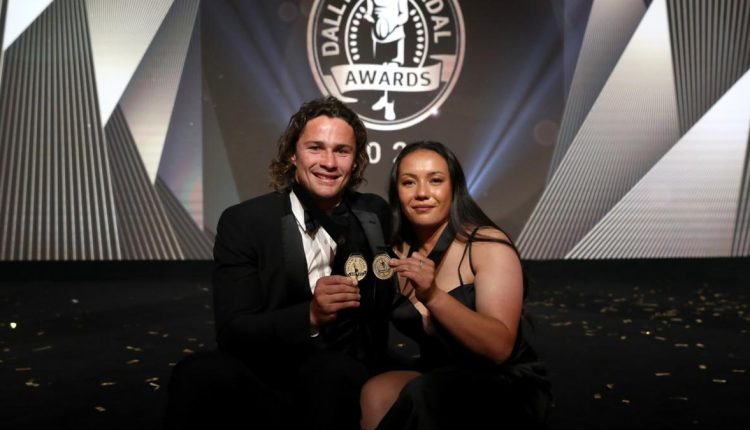 Nicho Hynes has proven his status as the NRL’s premier buy for 2022, joining Johnathan Thurston in an exclusive group of players to win a Dally M in his maiden season at a club.

Hynes on Wednesday night became the clear star at rugby league’s night of nights, with the Cronulla halfback claiming the game’s top gong with two rounds to play.

WATCH THE VIDEO ABOVE: Latest team news ahead of the grand final

After trailing Ben Hunt by three points when voting went behind closed doors following round 12, Hynes collected three votes in five of his last 11 games to win the award.

It helped him sit ahead of James Tedesco in second, while Hunt was third.

Rising Newcastle star Jesse Southwell was named the NRLW rookie of the year, while Sydney Roosters coach John Strange was the top mentor.

Todd Payten claimed the major men’s coaching gong, while his second-rower Jeremiah Nanai was the rookie of the year after scoring 17 tries for North Queensland.

Penrith’s Isaah Yeo was named captain of the year, headlining three Panthers in the NRL’s Dally M team of the year.

Hynes was also awarded the Provan Summons spirit of NRL award for his work in raising awareness for mental health.

But it is the top gong he will remember most, given it was his first season as a full-time starter.

Making his name as Ryan Papenhuyzen’s replacement last year when the Melbourne fullback went down with injury, Hynes was an instant star for the Storm.

A playmaker as a junior, Craig Fitzgibbon placed his faith in the 26-year-old as one of his first signings to lead the Sharks into the next era as No.7.

He was instantly rewarded with Hynes setting up 26 tries in a stellar season and becoming the first Shark to win the award since Preston Campbell in 2001.