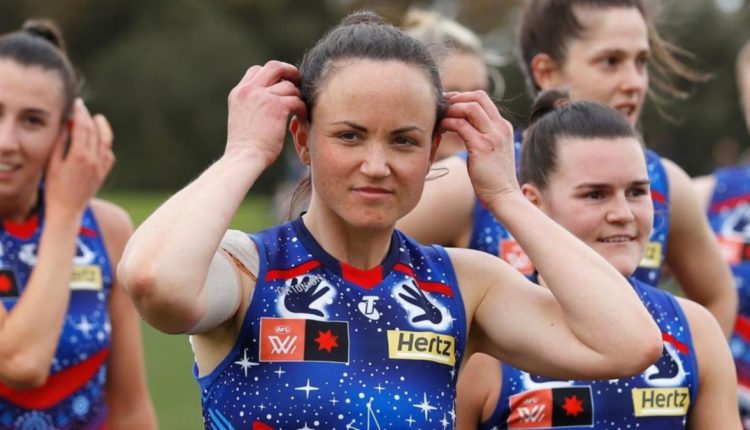 AFLW great Daisy Pearce has been brought to the edge of tears in an emotional monologue on the AFL’s “insensitive” plan to honour the Queen during Indigenous Round.

A minute’s silence preceded the Western Bulldogs’ clash with Fremantle, taking priority over a Welcome to Country, but the Dogs’ public outrage and private fury from others within the AFLW prompted the league to backflip for the remaining matches.

WATCH THE VIDEO ABOVE: Daisy Pearce brought to edge of tears in emotional speech

The NRL has also reckoned with the divide between its Indigenous community and attempts to honour the Queen, with NRLW player Caitlin Horan banned and hit with a suspended fine for an Instagram post on the monarch’s death.

Pearce, a leading voice in football as one of the AFLW’s first big-name players and a Channel 7 commentator, was given the time to put forward her perspective on SEN on Thursday.

The 34-year-old mother-of-twins said she supported the decision to axe the minute’s silence for the Queen because she understands the truth felt by First Nations people.

“For a lot of First Nations people, she represents pain and trauma and ongoing oppression that they don’t want to celebrate,” Pearce said.

Pearce’s club Melbourne this year adopted the name Narrm – the traditional Aboriginal name for the city – for Indigenous Round matches in the AFL and AFLW as part of its Reconciliation Action Plan.

Read the full transcript of Daisy Pearce’s monologue below

Well I kind of think that this all comes down to which version of our nation’s history you give voice to and bring to the fore.

Because to me Indigenous Round is not just a time for celebrating colourful jumpers, as awesome as they are, and not just for celebrating Indigenous players, but for educating ourselves and concerning ourselves with the facts in this country’s history that aren’t well told – and giving Aboriginal and Torres Strait Islander people a platform to tell their stories.

To me, that’s what Indigenous Round is about. And what I’ve learned going through that process with a number of Indigenous Rounds is that for First Nations people, colonialism is not something that’s universally celebrated.

It represents the genocide of their people, the theft of their land, the erasure of their culture and way of life, the loss of their wealth, their basic human rights – and their children.

To me, the Stolen Generation forever has just been awful but now as a parent, to think of the idea of someone turning up at your door and taking your children and scattering them around so that they’re almost untraceable, I just can’t fathom that.

There was legislation in this country that remained for decades, in some states as recently as the 1970s. This isn’t ancient barbaric history that happened way back when. This happened in our lifetimes – not yours and mine, but living peoples’ lifetimes.

The trauma and pain associated with that didn’t end with the removal of that legislation, it endures now and it has a very real effect on people and families and identities right now.

So while for many Australians and people around the world, the Queen represents a long, remarkable reign marked by goodwill, grace, leadership, family and service, for a group of very significant Australians, the first owners of this land, it doesn’t – it doesn’t represent that.

I understand the Queen inherited her role at a very young age and was not directly to blame for all these past atrocities and that she did an enormous amount of good, but for Indigenous people she leaves a 70-year legacy as the figurehead of colonialism.

And what I’m hearing and reading and learning through what I get to learn in Indigenous Round as part of an AFL club and someone who concerns myself with this stuff is that for a lot of First Nations people, she represents pain and trauma and ongoing oppression that they don’t want to celebrate.

So I assume that this decision to not observe a minute’s silence was listening to those Indigenous voices within headquarters and within our AFLW clubs and the communities that they were liaising with in preparation for Indigenous Round, who probably suggested it would be insensitive to honour and celebrate the head of state at a time when we as the AFL are outwardly denoting that we as a league are listening to and trying to understand and acknowledge their truth.

I only speak for myself but I was comfortable with and support that decision given the timing of where the two things fell.