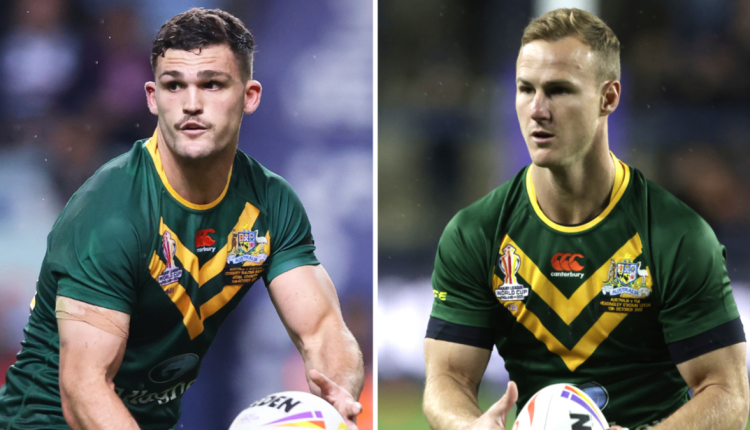 Kangaroos coach Mal Meninga appears to have made a call on who his halfback will be as Australia prepare to take on Lebanon in Friday’s (Saturday AEDT) World Cup quarter-final in Huddersfield.

Penrith’s Nathan Cleary and the Sea Eagles Daly Cherry-Evans have been in a running battle for the halfback role with Clearly set to get the nod and partner Cameron Munster in the halves.

WATCH IN THE VIDEO ABOVE: The Kangaroos prepare for Lebanon clash.

Cleary and Cherry-Evans were given a match each at the World Cup as the No.7 before playing together in Australia’s final group game against Italy.

Cleary’s appointment as the Kangaroos halfback continues an incredible 12 months for the 24-year-old after leading the Panthers to back-to-back NRL premierships and NSW to Origin success.

Meninga, who was absent from Australia’s latest training session in Manchester with illness, has agonised over his halfback decision, describing it as one of the toughest of his career.

He said his rotation policy would stop at the knockout stages and his best 17 would be picked each game as the World Cup reaches the business end of the tournament.

But if training was anything to go by, Cleary has been chosen ahead of the more experienced Cherry-Evans to partner Cameron Munster.

The Manly captain filled in at five-eighth and also at hooker, with Meninga likely to have to rely on drone footage and the advice of assistant coaches Adrian Lam and Michael Hagan before naming his team on Wednesday.

Under World Cup rules, Meninga must name his team by 11pm AEDT. As he did for the final group game against Italy, Meninga is expected to release his 19-man squad in alphabetical order.

Earlier in the tournament, Meninga named his team in the more traditional 1-17 positional order.

Speaking after the Kangaroos big win over Italy, Cherry-Evans said he was aware his role as the team’s playmaking chief was under threat.

“I knew what I was signing up for, Mal told me before we came,” Cherry-Evans said.

“This was always going to be an open competition.

“I knew I was either going to be playing for Australia for the whole time or have to be a bit selfless and do something special for a young group coming through.”

Cleary’s selection may also increase the chances of his Penrith teammate Liam Martin being picked to face Lebanon.

Martin trained extensively on the right edge for the Kangaroos and could be favoured there ahead of Cameron Murray, with Isaah Yeo set to start at lock and Angus Crichton to play left back-row.

The backline remained largely unchanged throughout the training session, with Jack Wighton expected to partner Latrell Mitchell at centre, with Valentine Holmes, Josh Addo-Carr and captain James Tedesco featuring in the back three.

On the injury front, prop Regan Campbell-Gillard is likely to miss the quarter-final clash after picking up a leg cork against Italy.