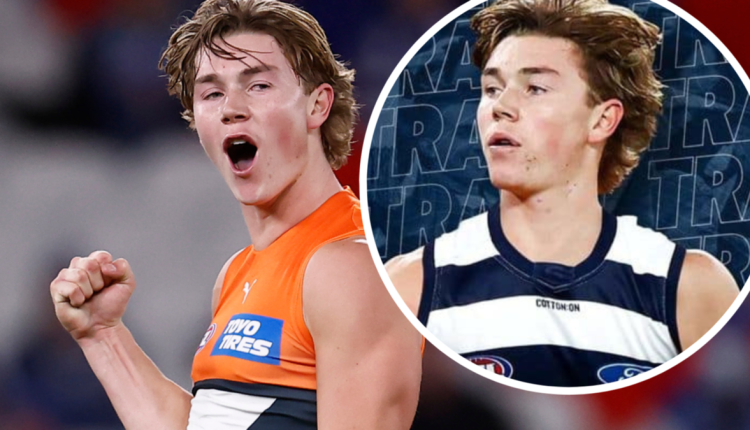 AFL premiers Geelong have landed one of their key trade targets, striking a deal with GWS for talented midfielder-forward Tanner Bruhn.

The 20-year-old will join the Cats in exchange for pick 18 at this year’s draft.

Bruhn was selected by the Giants with pick 12 in 2020 and played 30 games in two seasons, including 17 this year.

They are also likely to acquire more picks from the Tigers in a deal to send midfielder Jacob Hopper to Punt Road.

The Roos have said they are open to splitting their first pick if the right deal comes and, the Giants, according to football journalist Damian Barrett, are plotting a massive move.

Pick No.1 in this year’s draft will likely be Will Ashcroft, but he is tied to Brisbane as a father-son selection. So, with no clear standout second choice, the Roos might prefer to bring in two highly rated players instead of one.

Meanwhile, Geelong are hopeful of striking a deal with Gold Coast for Jack Bowes and pick seven, taking on board the player’s hefty salary in the process. The fine print of that deal should be finalised soon. The Cats are also negotiating with Collingwood over Ollie Henry, and are now expected to offer Collingwood pick No.25 for him after completing a massive pick swap with Brisbane.

The Cats traded picks 38, 48 and 55, as well as next year’s future second and fourth-round selections to the Lions for pick 25, hoping that should satisfy the Magpies’ demands for the out-of-contract forward.

“Tanner is a very talented player, who will add to our midfield stocks while also having the versatility to play other positions,” he said.

“Tanner had a number of options available to him and we’ve been impressed with the way he has handled himself throughout this period and we’re looking forward to seeing him wearing the hoops in 2023.

“We thank Jason McCartney and the Giants for the respectful and positive discussions between our clubs.”

Bruhn said he was looking forward to joining Geelong.

“I’m excited to be joining the Cats and getting back home to Geelong and continuing the next chapter of my career.

“I’d like to thank the Giants, players, staff and supporters for my time at the Club, I thoroughly enjoyed my two years and I wish everyone at the Giants every success.”