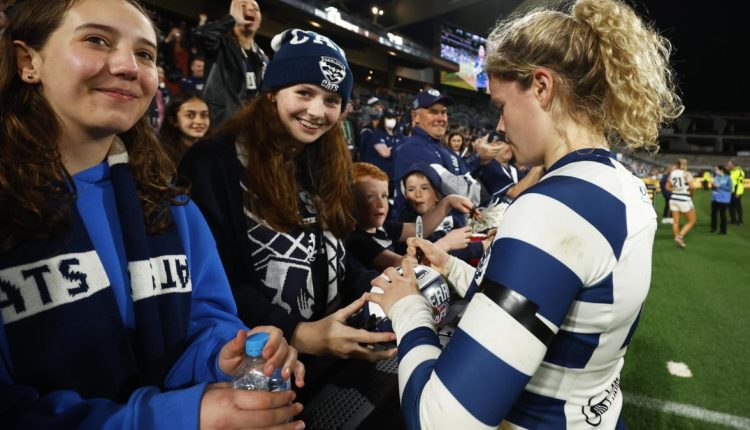 Geelong star Georgie Prespakis faces a nervous wait after concussing an opponent in a heavy tackle during her side’s 50-point AFLW demolition of St Kilda.

The total was the largest in Geelong’s history, bettering the previous mark of 10.7 (67) against Richmond in 2020.

But the biggest talking point to come out of the clash was the tackle from Prespakis on Erin McKinnon.

Prespakis pinned the arms of McKinnon before bringing the Saints ruck to the ground in the third quarter.

McKinnon’s head slammed into the turf, and she was motionless for about a minute before being helped up and taken off the ground.

Prespakis didn’t intend to hurt her opponent in the tackle. But given the league’s crackdown on any tackles in which the player can’t protect themselves, Prespakis is facing a likely suspension.

Geelong’s dominant win improved their record to 3-2, but more importantly they unlocked their scoring potential.

But by half-time against St Kilda, Geelong already had six goals to their name and a 40-1 lead,

The scoreline read 46-1 before Tarni White registered St Kilda’s first goal of the match at the 10-minute mark of the third term.

The Saints added another two goals for the match, but Geelong’s scoring power couldn’t be stopped.

“It means a lot,” Geelong coach Dan Lowther said of the win, which came just two days before the Cats take on Sydney in the AFL grand final.

“It’s grand final week, our men’s team have had a huge week on the track here and the community is excited, so we tried to use a bit of that to inspire us today.

“The win gives us some really good momentum and belief in how we’re doing things.”

Cats veteran Shelley Scott, who had been playing in defence this season, thrived in her return to attack and finished with three goals.

Cats midfielder Amy McDonald had the ball on a string to finish with 34 disposals and nine tackles, while former Eagle Mikayla Bowen was creative.

Prespakis, who racked up a career-high 32 disposals against North Melbourne last week, was prominent yet again with 25 possessions and 11 tackles.

Georgia Patrikios (20 disposals) and Kate Shierlaw (15 possessions, one goal) battled hard for St Kilda in a losing cause.

James Hird reveals Essendon ‘redemption’ plan: ‘I think I can make it better’