Calls for NRL Pride Round get louder despite Manly jersey debacle 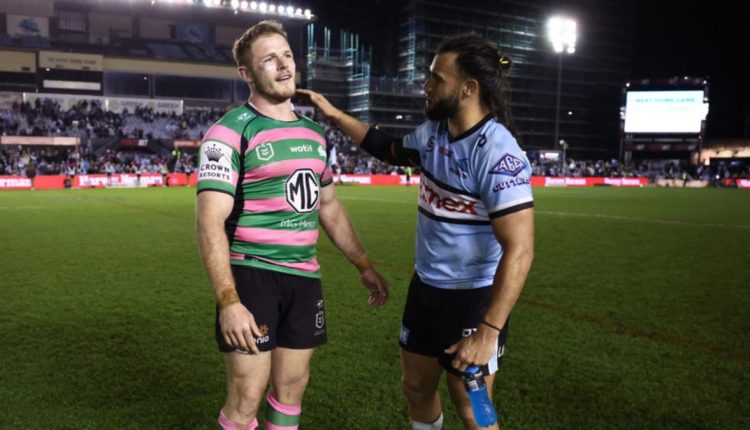 Cronulla Sharks star Toby Rudolf wants the NRL to bring in a Pride Round.

Rudolf has been one of sports biggest supporters of the LGBTQIA+ community and believes the initiative would do “wonders” for the community.

WATCH THE VIDEO ABOVE: Pride jersey drama hits the NBL.

The NRL was engulfed in a pride jersey drama last July when seven Manly Sea Eagles players refused to wear the club’s rainbow jersey and sat out a match against the Sydney Roosters.

The drama at the Sea Eagles threw the club into crisis with the team finishing the NRL season with seven consecutive losses and missing a place in the finals, plus coach Des Hasler was axed in the off-season.

At the height of the drama, Rudolf became one of the very few NRL stars to speak openly regarding his same-sex experiences, and said while he identified as heterosexual, he believes “love is love, and I love to share it with everyone”.

“What I will say is, I was raised by quite a few gay and lesbian community members. My uncle is gay and my godmother is gay, and there’s so much love in that community,” Rudolf told the Sydney Morning Herald last July.

Rudolf was overwhelmed with the positive comments he received following his revelations.

“I had so many people reach out to me, with some really really heartfelt messages that I couldn’t believe,” Rudolf told Fox Sports.

In an amazing piece of good news, Rudolf said his comments even saved the life of a young member of the LGBTQIA+ community.

“Without getting too personal with some of them, I do remember there was one kid that was saying that his family had just completely shunned him,” Rudolf said.

“It was my comments that sort of kept him from taking his own life. Honestly, that was one of the messages he sent.

“That was powerful for me, I am one front rower in a team, who doesn’t score too many tries, isn’t too popular.

“But if you can get an entire sport behind it, it promotes the positivity and it will create it.”

Australian Rugby League Commission chairman Peter V’landys has since revealed discussions will take place surrounding a pride round for the 2023 NRL season.

As yet, no pride round has been scheduled for the new season, but was set to be discussed in ARLC meetings in November last year.

Rudolf believes a pride round should occur every year and said it would do “wonders” for the community.

“Of course (a pride round should be introduced),” Rudolf said.

“Obviously last year there was just a breakdown in communication between Manly and whatever happened there, not that I know the ins and outs of it.

“I can’t see how it wouldn’t be a good thing, putting that out there to the community, rugby league obviously, with the likes of Ian Roberts, the first gay open athlete in Australia I am pretty sure.

If you need help in a crisis, call Lifeline on 13 11 14. For further information about depression contact beyondblue on 1300 224 636 or talk to your GP, local health professional or someone you trust.