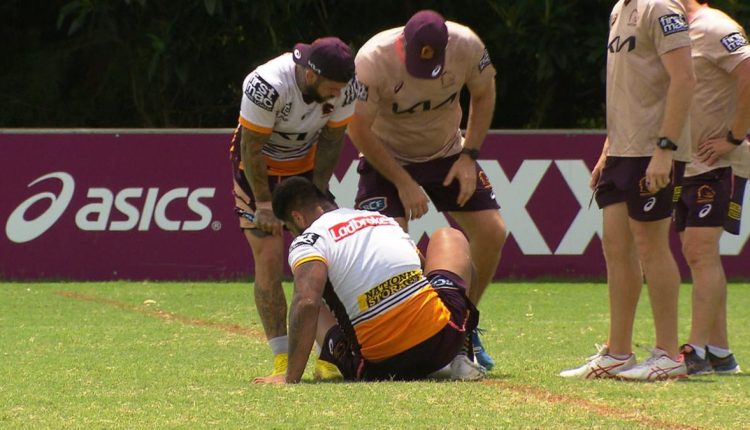 The Brisbane Broncos have been dealt a pre-season blow with star forward Payne Haas going down with a reported ankle injury.

7NEWS Brisbane journalist Katie Brown tweeted that Haas injured his ankle in a tackle at training and limped off the field.

The Broncos said that he will be monitored and will be sent for scans on Friday if required.

Teammate Cory Paix was hopeful the injury was on the minor end.

Haas is one of the best forwards in the NRL and won the Dally M Prop of the Year award in 2021.

The NSW Origin forward endured a difficult 2022 NRL season with contract dramas and was struck down with an ongoing shoulder injury which resulted in him playing 20 games during the season.

Haas requested a release from the Broncos and was sensationally booed by Brisbane fans in a home game against the Gold Coast Titans in May at Suncorp Stadium.

“I’m usually not one to get rattled, but when I heard the boos coming out tonight (and) when I got onto the ball it rattled me a bit,” Haas told Channel Nine after the game.

“But I had to compose myself and just stay in the game and do my job for the team.”

Haas is contracted with Brisbane through to the end of the 2024 NRL season after re-signing with the club in 2018 on a six-year deal, worth around a reported $800,000 a season.

In the end, Haas confirmed his commitment to the Broncos and ruled himself out of contention for the Kangaroos at the World Cup to focus on a strong pre-season with the club.

The 23-year-old put his contract drama and injuries behind him and finished the season strongly as he claimed his fourth consecutive Paul Morgan Medal – awarded to the Broncos’ best player of the season.

Meanwhile, Paix wants to win the battle for the club’s No.9 jersey and force Broncos coach Kevin Walters into picking him ahead of his own son.

Paix is battling with Walters’ son Billy and former Melbourne No. 9 Tyson Smoothy to lay claim to the Broncos’ hooking role.

“We’re in a fight at the moment and I’m prepared to fight for the jersey,” said Paix, who comes off contract this year.

“It’s a good challenge for us all.”