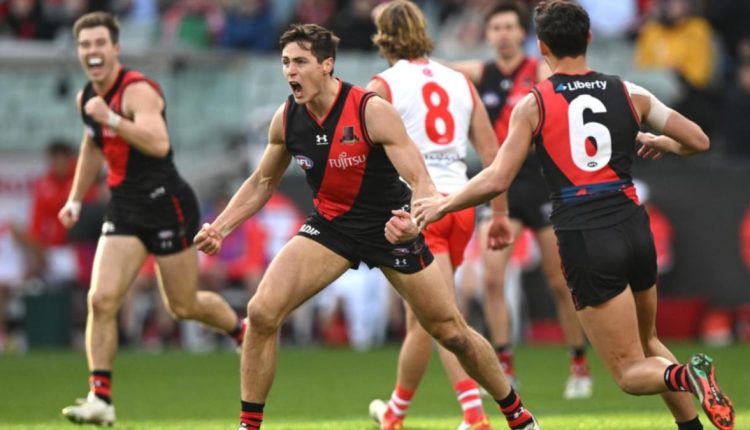 Essendon have pulled off arguably their finest win of the AFL season, stunning Sydney by nine points to strike a blow to the Swans’ top-four hopes and ease pressure on Bombers coach Ben Rutten.

The Bombers overcame an 11-point deficit at three-quarter time, with Jake Stringer pulling off a monster final term, to prevail 15.5 (95) to 12.14 (86) and leave the Swans to rue their poor efficiency around goal.

Swans co-captain Luke Parker was excellent in his 250th game and was booed by Essendon fans just about every time he touched it, after taunting Dylan Shiel in Sydney’s round nine win.

That proved quite often, with Parker racking up 25 disposals and nine clearances.

Chad Warner starred with three goals, seven clearances and 25 disposals while Errol Gulden impressed and Lance Franklin had a hand in plenty up forward.

Off the back of their embarrassing loss to West Coast, Essendon looked set for more pain early in Saturday’s contest at the MCG.

Tom Papley snapped the Swans in front less than two minutes into the match and they booted three of the first four goals, often able to stroll from end to end amid a dearth of forward pressure.

Merrett breathed some life into the contest when he snapped his first just before quarter time.

The Bombers found a renewed sense of urgency after the break.

It culminated in five consecutive goals and Wright handing them the lead for the first time in the game.

The Bombers booted the first two goals of the second half but were put under siege as the third quarter progressed.

But the Swans only delivered five points in response before Isaac Heeney and Will Hayward struck in the final 36 seconds of the term to deliver an 11-point lead at the final change.

Then Stringer got off the chain, booting a magnificent checkside then another on the run to get the Bombers back in the contest.

Mason Redman launched from long-range to put Essendon back in front, with Kyle Langford adding another.

With two minutes left, Warner goaled from a 50-metre penalty to keep it tight, before Hind iced the game in the final minute.