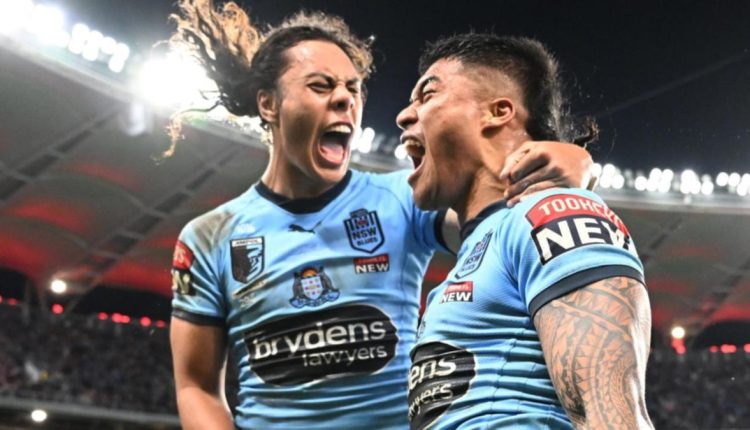 Jarome Luai and Brian To’o have hit back at claims their decision to play for Samoa lessened their passion for NSW, labelling the argument laughable and confusing.

Luai in particular has drawn criticism for the Blues’ State of Origin series-deciding loss at Suncorp Stadium a fortnight ago, amid claims Queensland’s win came because the jersey means more to Maroons players.

The Penrith pair are among a group of NSW players to declare their allegiance to Pacific nations over the Kangaroos for the end-of-year World Cup, alongside Daniel Tupou, Siosifa Talakai and Kotoni Staggs.

But claims from pundits that this showed the NSW jersey meant less to this group than to other Kangaroos hopefuls does not wash with the Penrith five-eighth.

“It’s pretty funny to be honest. I am pretty sure he (Kent) feels like an idiot at the end of the day.

“People have their opinions and as players you need to have that filter of which opinion is important.

“Any jersey I put on means a lot. To have my last name on a jersey, that’s what means the most to me. I don’t know how you can judge that.”

Luai said he had learned to deal with criticism after playing alongside Nathan Cleary in recent years, but questioning of his passion had confused him when passed on.

“It’s a bit weird. If we win that game then no-one is saying anything about us,” Luai said.

“But we lost and at the end of the day people are going to give you criticism and share their opinions.

“But we are players and play hard for each other every time we put a jersey on, no matter what jersey it is.

“So it’s pretty crazy that people are trying to judge us off that.”

To’o was also adamant there was no way his passion for NSW or any team he represents could be questioned.

“We take the jersey heavily, whether it is for Panthers or Blues,” he told AAP.

“Whatever jersey we put on we are so grateful for the opportunity and are obviously going to put our heart and soul into it.

“I was just mainly confused (about the comments), but it’s different when you are on the field compared to looking from the outside in.”

Regardless, the pair hope more players follow their lead to represent their heritage at the World Cup, with To’o encouraging others to follow their heart in any individual decision.

“We’re just proud of our Polynesian side,” Luai said.

“It’s the way you grow up and it’s a lifestyle. It’s how we grew up in the Samoan community, Samoan churches.