Best of the best: Every NRL team’s greatest Indigenous player of all time 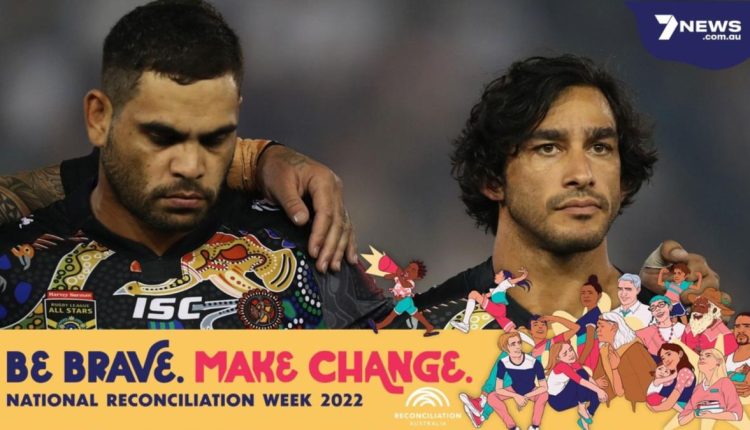 Indigenous athletes have brought so much to rugby league, it’s almost impossible to think of the great game without them.

The magic of Johnathan Thurston, the athleticism of Greg Inglis, or the physicality of “The Raging Bull” Gorden Tallis – the attributes these legends showcased are what makes rugby league so entertaining.

League great Owen Craigie put it perfectly when he told SBS in 2017: “Without Indigenous Australians, rugby league would be boring.

“You almost can’t coach Aboriginal players because they can do it all. They’ve got skill, they’ve got speed, they’ve got great anticipation of the game.”

Now as Australia marks National Reconciliation Week, 7NEWS.com.au has attempted the task of selecting each NRL club’s greatest Indigenous player as a celebration of all the incredible Indigenous athletes who have blessed the game with their talents.

Given the sheer weight of Indigenous talent in the game’s history, it’s an almost impossible undertaking, but we hope we’ve done it justice:

The Raging Bull was one of the toughest men to have ever played the great game of rugby league.

The second-row forward, who is of Torres Strait Islander and Vanuatuan descent, played in 160 games for the Broncos across eight seasons in the late 1990s and early 2000s, winning three premierships in the process.

Tony Currie made a huge impact for the Bulldogs across three seasons in the late 1980s.

The dynamic outside back made 39 appearances for the club, scoring 12 tries, and was part of the 1988 premiership-winning Bulldogs side that defeated the Balmain Tigers.

JT was voted the greatest Indigenous Australian rugby league player of all time in a poll conducted by NRL.com, and for good reason.

His skills and instinct for the game were second to none, but Thurston was so much more than a flashy playmaker.

His toughness was legendary, as was his ability to win games in the critical moments when all the odds were stacked against him.

Thurston was arguably the greatest Cowboys player of all time and delivered his beloved club a maiden premiership with a game-winning field goal in the 2015 grand final victory over the Broncos.

He played 294 games across 14 legendary seasons for North Queensland, racking up an incredible 2182 points, and four Dally M Medals, in the process.

Blacklock was regarded as one of the greatest entertainers and try scorers in rugby league history.

The electrifying winger was renowned for his somersaults during try celebrations, and he had plenty of opportunities to practise the move while being crowned the NRL’s top try scorer across three consecutive seasons for the Dragons between 1998 and 2000.

Blacklock scored 120 tries across 137 games for the Dragons. His impact was heightened by a lethal partnership with Indigenous teammate Anthony Mundine.

“I grew up learning to play what’s in front of me,” Blacklock said.

“It wasn’t robotic. If the opportunity comes up you have to take it there and then.”

Tahu was the perfect mixture of pace and power, which he exhibited across two thrilling playing stints with the Parramatta in the 2000s.

He played as centre in 63 games for the Eels, scoring 25 tries either side of a foray into rugby union with the NSW Waratahs and Wallabies, becoming a dual international in the process.

Described by some of the best rugby league minds as one of the most naturally talented players of all time, Craigie was sadly never able to fulfill his vast potential in the sport.

He made his debut for the Knights as a 17-year-old while still attending school, scoring 32 tries across 76 games for the club in the late 1990s.

His career was cut short by injuries after 168 games in the NRL and Super League, but he will always be remembered as one of the game’s most gifted athletes.

Rhys Lightning lit up the NRL with his incredible acceleration and line-breaking ability across 11 thrilling seasons with the Panthers between 1998 and 2008.

In 2003 Wesser set an NRL record by scoring 25 tries in a season, the most scored in one year by a fullback.

That year finished in glory for Wesser as the Panthers won their second premiership with victory over the Roosters in the NRL grand final.

All up Wesser scored 113 tries across 178 games for the Panthers, while also representing Queensland and the Indigenous All Stars.

While mention must be made of the likes of Nathan Merritt, Cody Walker, Greg Inglis and Latrell Mitchell, Eric Simms arguably sits above them all in terms of his overall contributions to the club.

Named fullback in the Indigenous Australian Team of the Century, Simms won four premierships with South Sydney in 206 games for the club across 11 seasons in the 1960s and 70s.

He was only recently overtaken as the top point-scorer in club history by Adam Reynolds, having notched up 1841 points thanks to his goal-kicking prowess.

Named at five-eighth in the Indigenous Australian Team of the Century, Daley is undoubtedly one of the greatest Indigenous rugby league players of all time.

He won three premierships during a 244-game playing career at the Canberra Raiders, where he featured in one of the greatest rugby league teams ever assembled across the late 1980s and early 1990s.

Daley won the Dally M Medal in 1995 and captained Australia in two Tests.

Big Artie Beetson is widely regarded as the greatest forward in rugby league history and also had the incredible distinction of being named the first Indigenous Australian to captain the country in any sport.

He was named at prop in both the Indigenous and Australian rugby league teams of the century and was inducted into the Australian Rugby League Hall of Fame in 2003.

Beetson, who possessed remarkable skill and speed for a large forward, won two premierships at the Roosters, where he played 131 games of his 233-game career.

Perhaps most importantly, Beetson is remembered as one of the great men of rugby league away from the field. His contributions to society, the game and his culture are celebrated by the Arthur Beetson Medal, awarded to rugby league players who possess similar qualities.

Peachey dazzled the NRL across 12 entertaining seasons with the Cronulla Sharks.

A freakishly gifted fullback, Peachey scored 110 tries in 232 games for Cronulla, winning Dally M Fullback of the Year twice and Dally M Captain of the year once during that time.

He was named at fullback in the Sharks Team of the Half Century in 2017.

Cliffy Lyons was named at lock in the Indigenous Australian Team of the Century, however he’s best known for his incredible hands and vision while playing five-eighth for Manly.

He won two premierships during an incredible 309-game career with the Sea Eagles across the 1980s and 1990s, winning the Dally M Medal twice and the Clive Churchill medal once during that time.

His ability to put teammates through gaps with his amazing ball-playing ability was perhaps his greatest strength, most memorably through his combination with Steve Menzies.

G.I. is one of the most incredible athletes Australia has ever produced, comfortable playing any position in the backline due to size, power and natural talent.

He burst onto the scene with the Storm in 2005 before quickly taking over the NRL.

Named at centre in the Indigenous Australian Team of the Century, Inglis played 118 games for Melbourne where he won two grand finals, a Clive Churchill Medal (as a five-eighth) and the Golden Boot Award.

He recently returned to the Storm ahead of Indigenous Round where coach Craig Bellamy described him as “a really important part of our history”.

“Everyone knows how talented and competitive he was and just how good he was, but he was also a great club man,” he said.

Campbell was small in stature but he made up for it with dazzling footwork, skill and instinct.

While he joined the Titans towards the end of his NRL career, his contribution to the club was incredibly significant, leading to him being named the first life member of the Titans in 2019.

Campbell was Gold Coast’s inaugural signing for their debut season in 2007, going on to play 103 games for the team based on the Glitter Strip.

He is also credited for being the driving force for the All Stars concept after playing for the Indigenous Dream Time team in 2008.

The skilful halfback, five-eighth or fullback is now celebrated with the Preston Campbell Medal, which is awarded to the man-of-the-match in the Rugby League All Stars match.

His son Jayden Campbell is now continuing the family’s significant legacy at the Titans.

Stacey Jones, who is of Maori descent, is one of the greatest rugby league players New Zealand has ever produced.

He is the first and only life member of the Warriors, having recorded 261 games for the club and captained them in their grand final appearance in 2002.

He was inducted into the National Rugby League Hall of Fame in 2019 and has been named a Kiwi immortal.

Corowa played on the wing for the Balmain Tigers, New South Wales and Australia during an incredible rugby league career across the 1970s and 1990s.

He was the league’s top try scorer in his first season with the Tigers, scoring 24 tries in 1978 to announce himself one of the best finishers of his generation.

Most likely the fastest player of his time, Corowa also played two Tests for Australia in 1979.

What is National Reconciliation Week?

National Reconciliation Week is an annual event for Australians to celebrate and learn about First Nations history, culture and achievements.

The theme of this year’s week is, “Be Brave. Make Change.”

“ ‘Be Brave. Make Change.’ is a challenge to us all to Be Brave and tackle the unfinished business of reconciliation so we can Make Change for all,” said Reconciliation Australia.

To mark National Reconciliation Week, 7NEWS.com.au is taking a look at the issues impacting First National people in Australia and their stories.