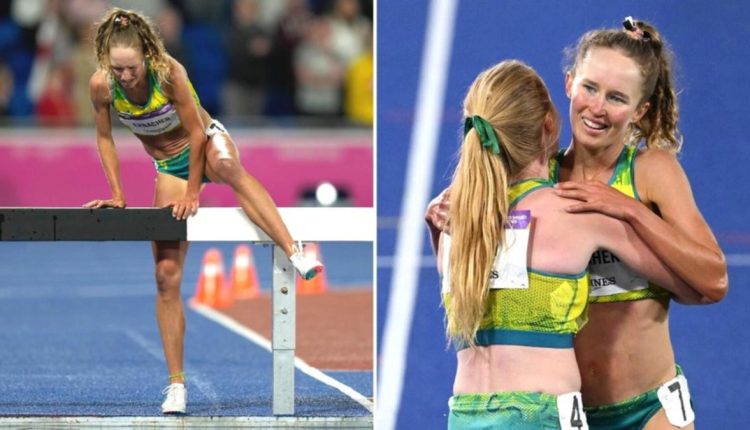 When Brielle Erbacher hit the first steeplechase barrier with three laps to go, she knew she was in trouble.

Then she crashed into a second 200 metres later and fell flat on her face as groans echoed around Alexander Stadium.

The easy option would have been to stop, but the 23-year-old was determined to finish her debut Commonwealth Games 3000m steeplechase – by any means possible.

First, she stopped hurdling the barriers and started climbing over them.

As Erbacher slowed up at the barriers and hauled herself over them only leaping over the water jump.

By the final lap, on her last legs, Erbacher was even cautiously stepping over the water jump, later admitting she just didn’t want to get “completely drenched”.

From there, the crowd and some of Erbacher’s fellow runners urged the battling 23-year-old over the finish line and into an embrace from teammate Amy Cashin, who had come fifth.

“(I’m feeling) pretty shit to be honest. I tried to stick with them and my legs just went,” Erbacher told reporters.

“I hit a couple of barriers and I just didn’t want to hit any more.

“I’m not sure what happened. I just couldn’t jump. That’s what happens when you start out a bit hard, I guess.

“When it came around that there were still three laps to go, I was like ‘you’re kidding me’, but I wasn’t not going to finish, as hard as it was.”

EVERY EVENT: Check out the full Commonwealth Games schedule

MEDAL TALLY: Every gold, silver and bronze at Birmingham 2022

LATEST RESULTS: Detailed breakdown of every event at the Games

Erbacher finished last in 10:59.64, almost a minute after the second-last runner and nearly two minutes after gold medallist Jackline Chepkoech.

It was the first time in her career Erbacher had experienced such a disastrous race, but she was adamant pulling the pin had never entered her mind.

“I reckon it would be weirder to pull out,” she said.

“It’s easier to finish, get to the line and just walk away with the rest of them instead of crawling off to the side.

“I was definitely going to finish, no matter what. But god it was hard.”

Just like Tokyo 2020 on Seven, there will be one destination to watch every epic feat, every medal moment, every record attempt and every inspiring turn from the Birmingham 2022 Commonwealth Games.

7plus is the only place to watch up to 30 live and replay channels of sport, see what’s on when, keep up to date with the medal tally, create a watchlist to follow your favourite events and catch up on highlights.