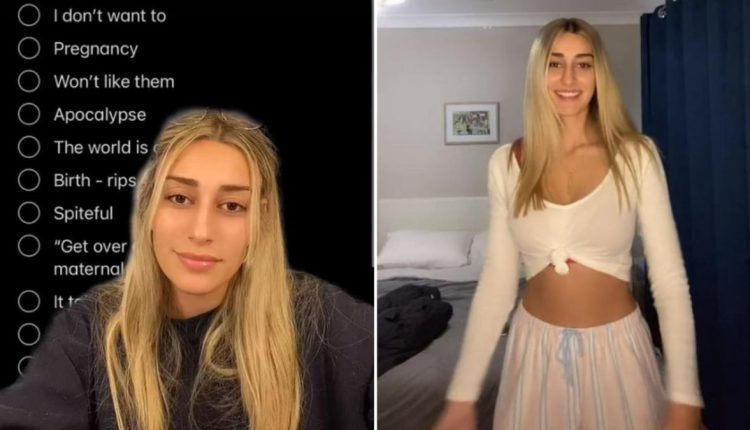 A young woman has offered up a brutally honest list of reasons why she won’t be having kids.

Maria, from Sydney, says while she has no issues with children, she simply doesn’t want to take on the responsibility of another human.

WATCH IN THE VIDEO ABOVE: Woman’s reason’s why she doesn’t want kids

For more Parenting related news and videos check out Parenting >>

“I like kids, I just don’t want my own,” the 21-year-old said in an amusing TikTok video.

She says she can’t bear the thought of carrying a baby in her body or bringing a child into the world in the unlikely case of an “apocalypse”.

“Scary things can happy to women during pregnancy. You can lose your teeth or your hair, I don’t want to go through that.”

Maria says she fears about the possibility of not liking her child when it is older.

“Kids are going to grow up, they’re going to have their own thoughts, feelings and opinions,” she said.

“What if they’re really annoying and I actually hate my child? What do I do then?”

She says she is worried about raising a child in a world that’s become a “bad place”.

“Apocalypse… I always think about the worst things that could happen in the world,” she said.

“I’m already worried that I’ll have to look after myself, my mum, dad and my siblings – I don’t want to add a kid to my list of stress.

“Very realistically, we could be left without food in the next 25 years. Do I have to worry about myself and a child? No.“

Another reason is she simply doesn’t want to experience the birth of a child.

“I don’t want to give birth. Birth is absolutely scary. Women die during birth,” she said.

Marie insists she enjoys looking after other people’s children.

“If you want to go spend time with your partner, I’ll look after your kid,” she said.

“If you want to do anything, and you need time away from your annoying kids, I’ll look after your kid because I can give them back.

She also can’t stand the thought of having to deal with a “needy” kid.

“I’m already needy. I don’t need someone else who’s going to be needy in my life. I don’t have the emotional or mental capacity for that,” she said.

Maria said bringing a child into the world could potentially take a financial toll.

“I don’t make enough money to sustain myself, let alone a child. They are so expensive – ridiculous,” she said.

Another reason was fearing about her breasts going “saggy” after pregnancy.

“When you become pregnant, your boobs go really big, beautiful… love it. And then guess what happens? They shrink back and your nipples face the floor,” she said.

Finally on her list was being able to enjoy her freedom as a childless woman.

“I could just pack up and move to Europe tomorrow if I wanted to,” she said.

“I want to do whatever I want.”

Her video has been viewed more than 750,000 times, and women have overwhelmingly agreed with her list.

“Nothing about having a child and being a mum has ever sounded remotely desirable to me. No thank you,” one wrote.

Another suggested: “This is gold but in all honesty it’s all true.”

One added: “I appreciate people accepting and normalising not having kids. It really isn’t for everyone.”

However, there were some mild dissenters to Maria’s ‘anti-children’ ideas.

“I totally agree with all of these … and somehow am still desperate for a baby,” one said.

Another commented: “I’m a mum of two teenagers, never wanted kids, all those reasons are so true too but somehow ya still end up loving them so much even when you don’t.”