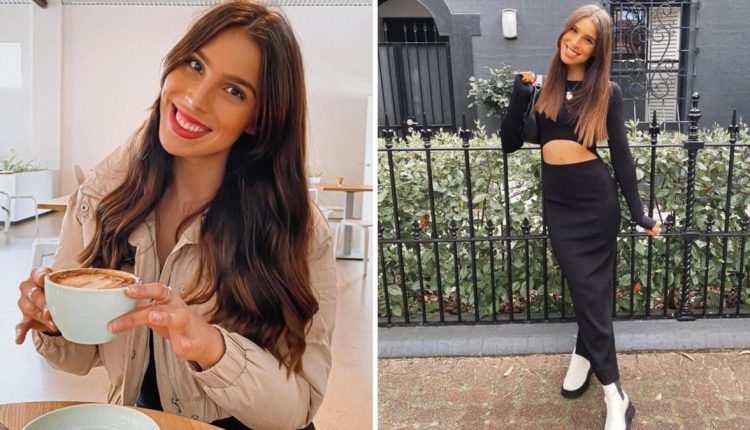 Jordan Lambropoulos never imagined she would be fighting for her life at 24.

The young woman, from Adelaide, was only nine when she was diagnosed with Crohn’s disease, an incurable chronic inflammatory bowel condition where her body attacks her own digestive system.

She has detailed the devastating reality of living with the “invisible illness” that causes severe, deep slits and ulcers through her mouth – leaving her struggling with eating, drinking and talking.

“I feel defeated,” Jordan tells 7Life from her hospital bed.

“My quality of life at present is diminished, but it takes hard times like these to truly appreciate the better times in life.”

She has such a rare case of Crohn’s disease that she can barely keep food down.

“My diet is pretty restricted as all foods cause pain at this point,” she explains.

“For the most part, I don’t eat anything with ‘colour’ or ‘wholegrains’, I stick to bland, plain foods like soups, rice, milkshakes and nutritional supplement drinks.

“I avoid certain foods, particularly legumes, vegetables, fruit and red meat because they are too hard for my bowel to digest and result in severe pain and intestinal obstructions – where my small intestine becomes blocked. This can become an acute emergency.

“I also avoid certain foods – crunchy, gritty things when my mouth and oesophagus are affected, as even opening my mouth and swallowing can hurt during these times.”

Despite her strict diet, Jordan says she would allow herself to “enjoy a nice meal every now and again”.

“But speaking of meals, I can’t eat a full meal anymore these days, I can only graze throughout the day,” she says.

“I don’t really mind not being able to drink alcohol,” she says.

“I feel like it encourages me to face my social anxieties head-on and be an approachable person with great communication skills without the added influence of alcohol.

“Although, once in a blue moon I’ll have a cocktail or a sip of wine, but more for the taste than the effect.

“I haven’t really drank more than a standard drink at a time since I was 19, so am not sure what effect it would have on me these days.

”But my body fights so hard just to stay alive so I’d hate to make that fight harder with alcohol added into the mix.”

Suffering symptoms since birth means the signs have become a normal part of her life.

“There was never really a point in my life where I suddenly became ill. I guess all of the symptoms I was experiencing were all I’d ever known and my only sense of normalcy,” she explains.

“I never knew anything different.”

From the age of three, she began developing severe mouth ulcers – but doctors couldn’t figure out what was wrong.

“My entire lower face and mouth would swell beyond recognition, and my lips would split and crack from the swelling,” she says.

During her childhood, her parents noticed her growth started to become “stunted” as her peers were growing taller than her – but they thought she would just “fill out” through puberty.

Growing up, she noticed she was always “feeling full” and bloating – despite eating small amounts of food.

She would find herself having to rush to the bathroom shortly after every meal.

As a kid, Jordan says she was “always tired” and “feeling sick” – but the symptoms were “mistaken for laziness”.

When she developed pneumonia at nine, a doctor instantly suspected she was suffering from Crohn’s after he noticed her mouth ulcers.

“When the likely diagnosis of Crohn’s was thrown around, I remember my mum crying in the car on the phone to my dad,” Jordan recalls.

“She had no idea what it was, but dad recognised the name, as my great-uncle on his side of the family suffered with Crohn’s.”

Jordan believes her pneumonia was a “blessing in disguise” because the infection led to her formal diagnosis.

“It turns out the mouth ulcers were always a hallmark symptom – and were one of the things that stood out most to my paediatric gastroenterologist,” she says.

“But to be honest, as a nine-year-old, I put the diagnosis to the back of my mind.

“Part of me was confused as we seemed so certain it was coeliac from the beginning, and I’d already prepared myself for the possibility of cutting out gluten just like my mum.”

Life in and out of hospital

As she grew older, Jordan spent much of her childhood and adolescence in and out of hospital.

“There were challenges over the years that began with schooling and making friends,” she explains.

“I ended up teaching myself the year 12 curriculum from home and hospital, obtaining an 95.00 ATAR at the end of it. Year 12 was by far my biggest challenge.”

Despite being a high achiever at school, Jordan has had to put her “dreams on the backburner”.

“My dream has always been to study medicine, but this has had to wait until my health allows it,” she says.

“It is hard getting older and seeing people my age in their dream careers, when my study phase hasn’t even started yet.”

Over the past 15 years, Jordan has been on every type of prescribed medication and treatment imaginable to treat her condition.

“But my body has failed all of those medications available in Australia, and additional ones granted under special circumstances,” she says.

“I never thought I would reach that point, but here I am with no conventional treatments left to try.

“So learning to live with an uncontrollable, treatment-refractory disease that will cut my life short has been an incredibly difficult challenge.

“It’s evident how aggressive my disease is from such a young age.”

She has undergone multiple surgeries – including open bowel resections where a segment of bowel is surgically removed.

Jordan has lost count of the number of procedures she’s received over the course of her life.

“Since April this year, I have undergone up to 10 surgeries,” she says.

“Only a couple of weeks ago, I underwent a revision of my colostomy as my Crohn’s unfortunately attacked and ate away at the skin surrounding my stoma.

“Essentially, I have failed every conventional therapy available and, short of a stem cell/bone marrow transplant, my doctors were left scratching their heads.”

Sadly, Jordan says she hasn’t been given promising news about her condition.

“I wish I could say the news has been positive in terms of my previous treatments, but unfortunately the nature of my disease has become quite dire these days,” she says.

She feels her only hope lies in a bone marrow transplant that she’s “patiently waiting” to get in January 2023.

“At 24 years old, I pictured myself with children and studying medicine – not fighting for my life and waiting for a lifesaving transplant,” she admits.

“I’d like to keep things as positive as possible – but in saying that I also try and be transparent with how my condition is at present rather than sugarcoating it.

“At present, the disease is currently attacking my skin, lips, mouth, oesophagus, stomach, small intestine, rectum/perianal region as well as other extra-intestinal manifestations.

“Fortunately, a haematology team in Sydney have agreed to take on my case and perform a bone marrow transplant in order to completely ‘reset’ my immune system.

Jordan says she’s “steroid dependent” but she knows she can’t stay on the medication forever.

“I can’t stay on steroids for long, my body and mind doesn’t cope,” she says.

“But the kicker is that my body is dependent on them, so until my transplant, it’s a game of waiting to see how long before my disease kicks back in once I’m weaned off steroids.”

By sharing her story, Jordan says she hopes to break the stigma surrounding Crohn’s disease.

“Basically there is an ongoing stigma surrounding the topic of ‘bowel diseases’. People just think the worst of our lives is spending a little too long on the toilet,” she says.

‘Far from the truth’

“But this is far from the truth.

“Crohn’s in its varying forms is a debilitating condition that, when left untreated, or becomes uncontrollable, can very quickly lead to life-threatening consequences.

“Talking about these topics, talking about bowels and bowel diseases could very easily save a life.

“So I cannot stress the importance of keeping this conversation open, no matter how awkward it may be.”

For those living with Crohn’s disease, Jordan says: “Never let the disease define you.

“Our disease already takes up so much of our time, why should it have to take away our hopes and dreams too?”

She adds: “Despite the hand life dealt me, I’m still very much a happy girl.”