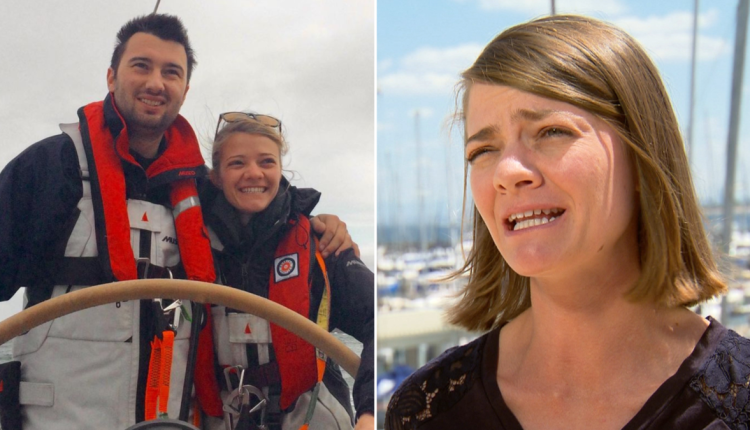 Australian around-the-world sailor Jessica Watson has opened up on the shock death of her long-term partner Cameron Dale.

Dale died of a catastrophic stroke in 2021 at the age of 29, following a 10-year relationship with Watson.

WATCH THE VIDEO ABOVE: Around-the-world sailor Jessica Watson opens up on tragic death of partner.

Both sailors, they met and fell in love not long after Watson attempted to sail around the world by herself in 2009 at 16 years of age.

Today, Watson still needs all her famous grit and determination to cope with the tragic death.

In a candid interview with Channel 7, Watson revealed she still relies on sailing to help her through the grief.

”It hasn’t been pretty. It’s very, very tough … tougher than I would have imagined,” she told 7NEWS.

“And, yeah, when I say (sailing) has been a lifeline it really kind of … there definitely were a few points where I was clinging to it, yeah,” Watson said.

At the time of Dale’s death, Watson wrote: “We lost our Cam – my long-term partner in every aspect of life and planned future.

“We’ll be forever grateful for the dedicated care he received at the Gold Coast University Hospital.”

She is now an advocate for stroke awareness after high blood pressure contributed to Dale’s fatal stroke.

”I think strokes for young active people and high blood pressure were just not something in the slightest on our radar,” she said.

Almost a quarter of stroke patients are under 55.

That means 29 young Australians suffer a stroke every day, mostly because of high blood pressure.

Despite her own grief, Watson is campaigning to save lives, her legacy for Cam..

”For me it’s so simple … get our blood pressure checked,” Watson said.

“For me it’s just such an amazing way to honour Cam and to hopefully prevent this happening to others.”

McGowan said: ”Jessica Watson is one of the bravest Australians that we have .. she’s done some amazingly courageous things, but this is probably one of her most courageous.”

Watson’s remarkable story has been turned into a Netflix film called ‘True Spirit’ and will be released on February 3.

“So proud of everyone involved!” she said on Instagram.

“Some of @teegancroft’s lines ring so true to me today – it’s a little unnerving in a lovely way.”

In the film, Watson is played by Australian actress and Titans star Teegan Croft, with Anna Paquin as her mum Julie Watson and Josh Lawson as Jessica’s dad, Roger Watson.

The movie is based on Watson’s book of the same name, published in 2010.

Although Watson did not quite reach the 21,600 nautical miles required to achieve full circumnavigation of the globe, she was awarded a Medal of the Order of Australia and has been included in the Australian Sailing Hall of Fame.

The trailer for True Spirit shows her battling shocking conditions at sea, struggling with fear and loneliness during the ordeal, and the press coverage of Watson’s trip, with one reporter suggesting her parents were irresponsible for letting her undertake the journey.

Despite the difficulties of the endeavour, though, Watson emerges triumphant.