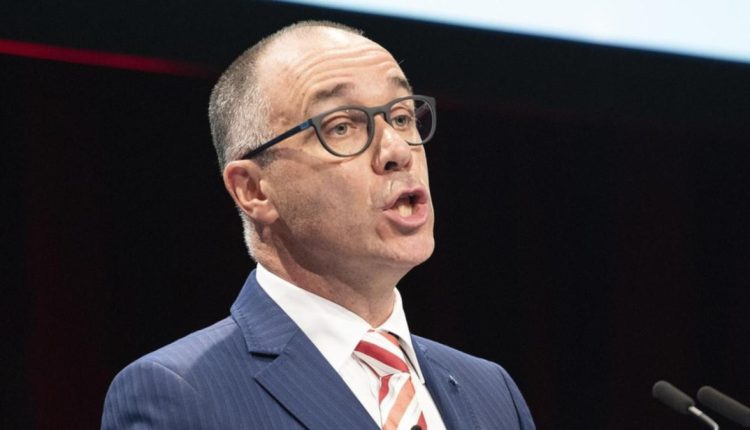 The Bombers accepted Thorburn’s resignation on Tuesday amid backlash over his role as chairman of the Melbourne-based City on a Hill church.

WATCH THE VIDEO ABOVE: Bombers in discrimination storm over shock CEO exit.

In sermons from 2013 – a year before Mr Thorburn became chairman – the church described practising homosexuality as a sin and likened abortion to the murder of people in concentration camps.

The former NAB boss opted to stay with the church when told it was untenable to remain in both roles.

In a social media post hours later, Mr Thorburn said he had always promoted inclusivity but it was clear his personal Christian faith was “not tolerated or permitted in the public square, at least by some and perhaps by many”.

Opposition Leader Peter Dutton said the church’s comments on homosexuality and abortion were abominable but did not reflect Thorburn’s views.

“The fact that an individual can be sacked from a position because of his religious belief doesn’t have any place in our country,” he told reporters on Wednesday.

“Whether it’s Christianity, whether it’s Judaism, whether you’re part of a mosque, or a temple – it doesn’t matter. We don’t tolerate discrimination against anybody on that basis.”

City on a Hill is described on its website as having been “planted in 2007 as an Anglican congregation”.

Sydney Anglican Bishop Michael Stead claimed the City on a Hill sermons regarding abortion and homosexuality were “not extreme” and reflected beliefs held by various faiths.

In a statement for the Freedom of Faith group, Bishop Stead said Australians should be shocked by Thorburn’s treatment and called on the Albanese government to urgently implement a promised religious discrimination bill.

“He has been pushed out of his new role solely because of the moral and religious views expressed on a church website with which he is associated,” the bishop said.

“This action shows there is no commitment by the Essendon board to embrace a diversity of moral or religious views.”

Thorburn’s resignation was welcomed by the Purple Bombers group, which advocates for Essendon’s LGBTQI supporters and players.

The Albanese government has promised laws to guarantee religious freedom but has not set a timeframe for their introduction.

Meanwhile, the new club’s president, David Barham, is feeling pressure with the club being widely criticised following the bungled appointment.

Barham took responsibility for reference checking Thorburn, but called the appointment a “misstep” that would be easily fixed.

But former Essendon chairman Paul Little said the club was in “chaos”.

“The mistakes that have been – there are just too many, quite frankly,” Little said.

Essendon great Matthew Lloyd said he doesn’t like it when the person in charge of finding the CEO becomes the CEO, as was the case with Thorburn.

“I’m sort of gobsmacked, to be honest. It’s embarrassing … and another hit on the club,” Lloyd said on the AFL’s Trade Radio.