Amrita died 21 hours after attending hospital in pain. Her parents are calling for change 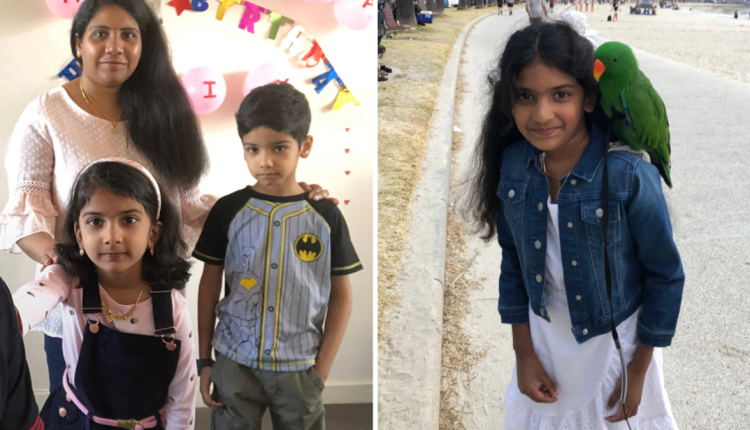 The parents of an eight-year-old girl say their lives have been destroyed, after a damaging review found several failings in their daughter’s care leading up to her death at a Melbourne hospital.

Amrita Varshini Lanka died from lymphocytic myocarditis, which is inflammation of the heart muscle, at Monash Children’s Hospital on April 30.

She died about 21 hours after initially presenting to the emergency department with stomach pain.

Her death prompted a sentinel event review which found that, while a test of her heart read as abnormal, doctors did not appreciate how severe her condition was until her heart stopped temporarily for the first time.

The review findings, shared by Amrita’s family, said if the test was interpreted correctly at the outset, the on-call cardiologist may have been phoned earlier, potentially leading to faster diagnosis and treatment.

Staff at Monash also wrongly assumed Amrita’s blood results were “falsely elevated” and failed to keep tabs on her falling blood pressure – a sign her heart was beginning to fail.

“We should have been celebrating her birthday with gifts and cakes but here we are mourning.

“Monash hospital has sealed Amrita’s fate. They have sent her here.”

The review found there was a communication breakdown between hospital staff and Amrita’s family, and also between medical and nursing staff.

There was a delay in getting life support to Amrita, who should have been transferred to the Royal Children’s Hospital.

“Early transfer may have improved (Amrita’s) chance of survival, although the panel members expressed reservations, given the severity of the changes on the (electrocardiogram) and her low blood pressure, which were indicative of the severity of the myocarditis,” Monash said in a letter to Amrita’s parents.

Monash has accepted the review’s 11 recommendations, including that there be a consistent approach to monitoring children’s vital signs and that it liaises with Safer Care Victoria to explore a state-wide process for families to escalate concerns about their loved ones.

However, Amrita’s family has highlighted deficiencies in the sentinel event review, saying the hospital made mistakes well before the review suggests.

The family has called on Health Minister Mary-Anne Thomas to commission an independent review into Amrita’s death.

They also want the introduction of “Amrita’s rule”, a state-wide escalation process for families who feel hospital staff are not acting on their concerns.

“We have lost (Amrita forever), but in this endeavour, we want the health minister to take actions to prevent avoidable deaths,” Amrita’s father said.

The family has engaged Slater and Gordon practice group leader Lee Kimonides to investigate a medical negligence claim against the hospital.

“Whether or not her death could have been prevented will form part of our investigation, along with any entitlement the family has to compensation,” Kimonides said.

The sentinel event report has been submitted to Safer Care Victoria to review and identify any potential emerging trends.

If experts recommended a system-wide approach to escalation protocols for parents, carers and families, the Department of Health would work with health services to achieve that, a spokesman said.

The Monash investigation was undertaken with external experts and in conjunction with Safer Care Victoria.

Premier Daniel Andrews expected Safer Care Victoria would have more to say to the government about things that needed to change in light of Amrita’s death, he said.

Think petrol is expensive now? A global decision means it’s about to get worse