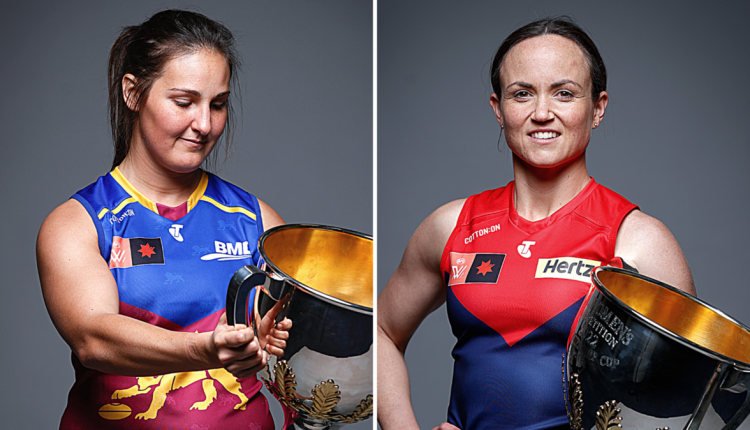 The second AFLW grand final for 2022 is here with the Brisbane Lions and Melbourne set to battle it out at Brighton Homes Arena in Springfield on Sunday.

It’s the culmination of the first season where all 18 clubs have fielded a women’s team and the first time we’ve seen a full four-week finals series, replicating the men’s fixture.

For the Demons, it will be their second shot at the premiership this year after Adelaide broke their hearts in Season 6.

Both teams have grand final experience, but only Brisbane have tasted the ultimate success.

We take a look at everything you need to know ahead of the first bounce.

How to watch and live stream the grand final

Coverage of the AFLW grand final will begin from 1.30pm AEDT (12.30pm AEST) and will be live and free on Seven and 7plus.

Brisbane broke its five-game losing streak against the Demons in round four, winning by 15 points in a wet contest at Casey Fields.

Melbourne booted three goals before the Lions got on the board with the league’s leading goalkicker Jesse Wardlaw inspiring the fightback with two goals.

Demon Tyla Hanks starred early on, so did teammate Lily Mithen in her 50th game, winning a game-high 23 disposals and seven tackles.

After trailing at the final break, the Lions booted the only three goals in the final term to take the win and cement their spot at the top of the ladder.

The two sides also met in a preliminary final last season with Melbourne pipping Brisbane by four points to seal a spot in their first grand final.

Both league best and fairest recipients this year are Lions with Ally Anderson joining Emily Bates on the honour roll after Tuesday night’s thrilling count.

Bates will be lining up in her fourth grand final for the club and said she “definitely” made the right decision to stick with Brisbane after heavy interest from expansion sides in the (very short) off season.

She added the players made a pact after losing last season’s preliminary final to the Demons to remain together as a unit and “go one better this season.”

The Brisbane Lions have seen plenty of finals action but only won their first flag last year.

They were runners up in both 2017 and 2018 before finally breaking through in an 18-point win over the Crows at Adelaide Oval in 2021.

Melbourne will be feeling like they have a lot on the line as they enter their second grand final for the year, having lost by 13 points to Adelaide in April.

Demons skipper Daisy Pearce will be having a second crack at a first premiership in what could be her final AFLW game.

Pearce was bombarded by questions about her potential retirement during last season’s finals series and this time around it has been no different.

The 34-year-old has been accepted as part of the Women’s Coach Acceleration Program, one of nine positions, designed to fast-track the development of women in coaching and assist in their progression to senior coaching roles across both AFL and AFLW programs.

She will commence a role with Geelong following her retirement from footy, with guaranteed employment for a minimum of two years between now and 2025, suggesting if this isn’t her last season, the next likely would be.

Pearce said this week: “I honestly haven’t made a decision on it. I’m just going to let myself stay in the moment and enjoy this week and have an almighty crack on the weekend and just see where the dust settles on that.”

Melbourne forward Tayla Harris will face one of her former sides in the grand final in what will be her fourth attempt to win a premiership with three different clubs.

The Brisbane-born forward, who also played with Carlton, said this week she was fit to play the decider after injuring her shoulder early in the Demons’ preliminary final win over North Melbourne.

The Lions are preparing for her to take the field and defender Shannon Campbell expects her former teammate will be out to prove a point.

“You’ve got to respect a player like that,” Campbell said.

“She will throw her body around whether she is injured or not injured so we have got to be careful of her and their whole squad because they are a very good team.

“We will be out there to shut her down. We know she is going to fly for everything so if we can lock her down and not give her that chance to get up on the footy we should be OK.”

The venue choice has been a huge talking point since it was announced that Brisbane will host this season’s grand final at their new base, Brighton Homes Arena in Springfield.

The Lions won the right to host the decider but with both the Gabba and Metricon Stadium unavailable, the brand new $80 million facility will be used for the first time on grand final day.

The AFL have come under fire for the decision, as the venue has only 600 grandstand seats available, and holds a maximum of just 8000 people, which is less than half the 16,712-strong crowd from the season six grand final.

Tickets sold out mere hours after going on sale and critics have suggested the venue is too small for the big event.

A digital scoreboard, interchange benches, signage and marquees were all required but league officials have ticked off the playing surface, which was laid just six weeks ago.

“It’s not only the best place in Australia, I’ve been to (NFL teams) New York Giants and Philadelphia Eagles – it’s every bit as good as those facilities.

“It’s our home for a long, long time and hopefully we’re playing plenty of Grand Finals here over the next few years.”

Sharpshooters at both ends

Brisbane tall forward Jesse Wardlaw will be a formidable force in front of the goals on Sunday after winning the Season 7 leading goalkicker award.

The 22-year-old kicked 19 goals during the home and away season to finish three clear of Melbourne’s Kate Hore, who kicked 16.

Hore topped the Demons’ goalkicking, but also showed her worth around the ball with an average 14 disposals going at 63.6 percent efficiency, 6.5 uncontested possessions, 3.5 tackles, and 1.6 inside 50s, and 199.7 meters gained.

Hore won the leading goalkicker and goal of the year in season 2020, so has shown consistency up forward and knows how to perform under pressure.

The pair will be pivotal to their side’s success on Sunday.