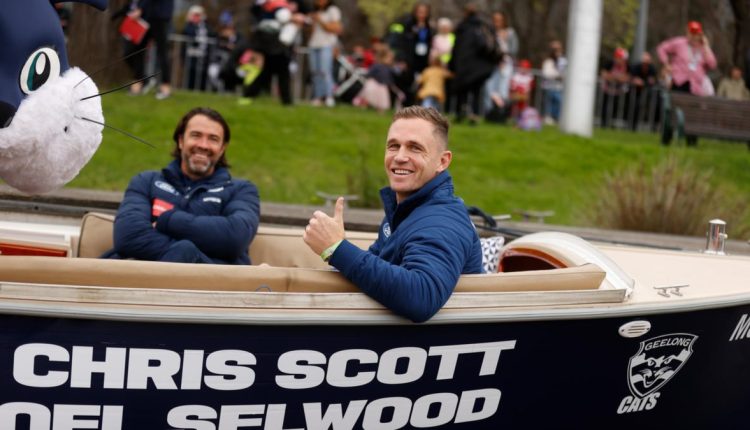 AFL fans have been left angry and disappointed after queueing for hours on Melbourne’s Yarra River to watch the re-imagined Grand Final Parade, only to be left high and dry as the boats carrying the players turned around before reaching Princes Bridge.

Since the parade’s inception in 1977, it has been a motorcade through the city, but this year Geelong and Sydney players and coaches took to barges on the Yarra River. The only problem for fans, however, is the boats did not travel as far down the river as advertised and many did not catch a glimpse of their sporting heroes.

WATCH THE VIDEO ABOVE: Fans fume as GF Parade boats do a U-turn on the Yarra.

7NEWS reporter Nick McCallum said the radical change to the parade fell flat with thousands of fans – “who had spent hours waiting on the riverbank” – unable to see the players.

“While we’ve been standing here people have been walking past telling us how disgusted they were, so it was a very mixed reaction to this controversial move by the AFL,” McCallum said.

Fans vented their frustration on Twitter and one told McCallum the parade lacked atmosphere “because people couldn’t get close enough to the players”.

However, Geelong fan Leanne Deahl , who had caught two trains from Geelong to make it to Melbourne for the 10.30am start, said: “It’s a really good spectacle on the river.”

It is the first grand final parade in three years, after the AFL scrapped the event in 2020 and 2021 due to COVID-19 lockdowns.

“I don’t even want to tell you how much I spent on flights and accommodation but we made it,” he said.

“You wouldn’t want to miss this for the world.”

Fellow Swans fans Debbie Walker and Michael Hogan also made the journey to Melbourne by car and plane.

The Sydney friends were feeling excited and nervous ahead of Saturday’s game.

“I wouldn’t just say that. We beat them earlier in the year and we’ve won nine games in a row so you have to be confident.”

Geelong supporter Naman Shah said his Cats were in with a chance after facing heartbreak in the 2020 grand final.

The Melbourne man avidly watched the parade with his three young daughters and wife.

“The last couple of years, there was no fun parade so it is really great that this year we can come out and do this,” Shah said.

The grand final has already drawn thousands of people to the city with 75 per cent of Melbourne’s hotels, motels and serviced apartments booked out.

“It’s really important but it’s also fundamentally about who we are as a community of Victorians.”

Dimopolous said allegations of racism at the Hawthorn Football Club would not tarnish the excitement of grand final week..

“They are harrowing and really disturbing allegations. But the AFL has strongly committed to an independent external investigation, which is the right thing to do,” he said.

“It’s provided us clear air and some genuine opportunity for Victorians to enjoy the greatest game in the country.”