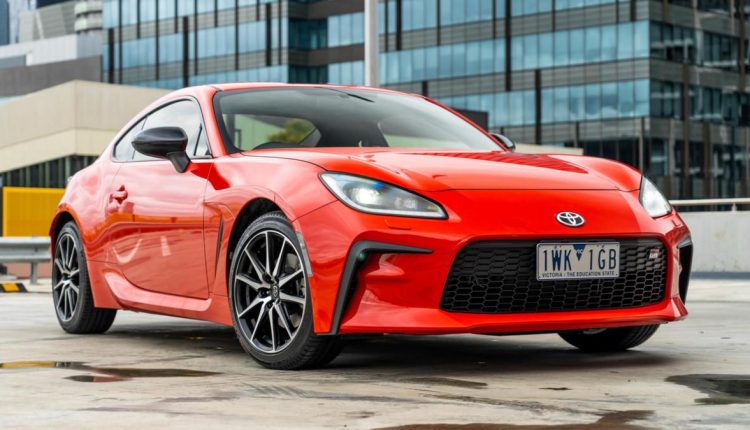 If you want to have fun on a budget, the Toyota GR86 and Subaru BRZ should be high on your shopping list.

Now into their second generation, the rear-wheel drive twins haven’t deviated far from the formula laid down by Toyota and Subaru when they launched the first BR-86 (or should that be GRZ?) in 2012.

Although the rear-drive chassis, naturally-aspirated engine, and simple but practical interior live on, one key thing has changed in the new GR86.

It’s also more expensive than the base BRZ with which it shares its oily bits, but packs less equipment.

Is the new GR86 enough fun to justify its steeper starting sticker, or should you just stick with the Subaru BRZ?

How much does the Toyota GR86 cost?

That’s up almost $3000 on the equivalent Subaru BRZ, although opting for the 86 GT automatic flips the equation – where the BRZ automatic is $3800 more expensive than the manual, the 86 manual and automatic are the same price.

With a sticker price of $45,390 before on-roads, the range-topping GR86 GTS is $3800 more expensive than the equivalent BRZ with a manual ($41,590), but is priced identically with an automatic transmission.

What is the Toyota GR86 like on the inside?

It’ll be familiar to owners of the first-generation car, but the new 86 has taken a step forward in a couple of key areas.

The seats here are trimmed in what feels like quality cloth, and offer the right blend of bolstering and long-haul comfort for a car that’ll be driven daily… and in anger. They’re set slightly lower in the cabin than before to free up a bit more space.

The small steering wheel has been lifted directly from the facelifted previous-generation car, and feels just right in a car like this. There’s no flat-bottom or paddles to distract, although the little button pods on the two spokes are easy to accidentally hit if you have big hands.

It’s still a tight fit up front, but you can live with this comfortably in a way you can’t a Mazda MX-5. Not only does it have more space, it has two cupholders under the folding central armrest, usable door pockets, and a glovebox.

The digital instrument binnacle is simple but effective, and has been laid out to loosely look like a boxer engine. You get speed and revs prominently in the centre, flanked by fuel and temperature gauges on the right, and a customisable pod on the right-hand side.

Like the BRZ, the 86 runs a version of Subaru’s infotainment software on an 8.0-inch touchscreen in the middle of the dashboard. It’s been pared back relative to the version used in the Subaru Outback, but operates quickly and logically.

With no satellite navigation, you’ll need to plug in for Apple CarPlay or Android Auto if you want mapping.

The inclusion of a clear reversing camera is a win, while the USB ports are now hidden away beneath the armrest so cables don’t get tangled up in the gearstick when you’re in a hurry.

There’s no doubt the cabin has been built to a price. There are plenty of cheap or hard plastics, and it looks a bit old-hat compared to a Hyundai i20 N or Ford Fiesta ST, but all the main touch points are high-quality.

Subaru and Toyota have clearly focused on getting the fundamentals right for drivers.

The steering wheel, gear knob, and handbrake lever are trimmed in leather, and the armrests are soft and squishy. The simple climate control binnacle looks and feels more upmarket than the setup in the first-generation car as well.

As for the rear seats? Having them is good, using them is painful unless the people trying to sit back there are tiny. But take it from an ex-BRZ owner, they really are usable in a pinch – and with them folded, you’ll be surprised about what fits back there.

Boot space is a claimed 237 litres.

What’s under the bonnet?

Power in the Toyota GR 86 comes from a 2.4-litre naturally-aspirated four-cylinder boxer engine, driving the rear wheels. Peak power is 174kW and peak torque is 250Nm, up 22kW and 38Nm on the old car.

Buyers are able to choose between a six-speed manual or six-speed torque converter automatic. Our tester was fitted with the enthusiast’s choice, the manual.

The GR86 has a 50-litre fuel tank, and drinks 98 RON premium unleaded. Claimed fuel economy is 9.4 litres per 100km on the combined cycle, which we perfectly matched on our week behind the wheel.

How does the Toyota GR86 drive?

The first 86 had a distinctive feeling from behind the wheel, and the new one doesn’t deviate too far from the formula. It just feels a touch more grown up, and a touch more refined in a few key areas than before.

Slot the stubby shifter into first and the light, short action will instantly feel familiar to previous owners, as will the slightly springy clutch. The second you ease off the clutch, however, it’s clear the bigger new engine has torque in all the places the first-generation car was missing it.

It pulls more happily from the bottom of second or third gear around town, and when the road opens up that horrid torque valley in the mid-range of the last car has been flattened out. It’s not going to crush your chest and make you beg for mercy with its sheer pace, but getting the best out of it doesn’t feel like a chore anymore.

The 2.4-litre engine has the same slightly offbeat bark as before, piped into the cabin for a bit more drama behind the wheel, but it’s not coarse or buzzy like before at the top end.

There’s no doubt the manual transmission is the pick of the GR86 range. The pedals are well spaced for rev-matching – a necessity given there’s no active rev-match technology to help you out – and having to row your own is perfectly in keeping with the car’s pitch as an analogue beast in an increasingly digital world.

Subaru and Toyota say the synchros on the manual have been tweaked to make the second-to-third shift quicker and smoother, and the shift from neutral to first a bit less crunchy, but the transmission feels fundamentally the same as before.

Ride quality is excellent on the 17-inch alloy wheels, making the 86 easily daily driveable. Although the blind spots are noticeable, it’s small enough and vision is good enough to ensure it’s easy to place in town.

The fact Toyota has left out the safety equipment Subaru makes standard on the BRZ manual is hard to forgive, though. Depending on your perspective, that’ll be either a disappointing omission in 2022, or a blessed relief from the slow creep of autonomy into our lives.

Toyota and Subaru didn’t need to fiddle with the car’s steering, which was just right from the start. Thankfully, they haven’t.

There’s no artificial heaviness or faux-sporty quickness built in, but the still goes exactly where you want it to, and there’s enough feedback through the wheel and seats to feel what the car is doing beneath you.

It’s beautifully balanced, and the new engine makes it easier to exploit that when you aren’t driving at ten-tenths, bouncing off the limiter.

Unlike Subaru, however, Toyota has stuck with Michelin Primacy rubber on the base 86. Where the new BRZ (and the 86 GTS) have more traction than the old car thanks in part to the standard Michelin Pilot Sport 4S tyres, the base 86 GT feels a bit limited in the wet.

The transition from grip to slip can happen quickly, although the electronic aids are on hand to catch you in Normal mode if things get hairy.

The idea of making oversteer more accessible with efficiency-focused tyres is a good one, but our experience with the BRZ on its stickier tyres is that it still feels playful when you want it to.

What do you get?

Is the Toyota GR86 safe?

The Toyota GR 86 and Subaru BRZ haven’t been crash tested by ANCAP or Euro NCAP.

Manual versions of the entry-level GR86 GT also miss out on any form of active driver-assistance features.

Opting for the GT automatic gets you:

How much does the Toyota GR86 cost to run?

Like the wider Toyota range, the GR86 is backed by a five-year, unlimited-kilometre warranty.

Maintenance is required every 12 months or 15,000km, and Toyota caps the price of the first five services.

They’ll each set you back $280 regardless of which transmission you opt for, significantly undercutting the BRZ.

CarExpert’s Take on the Toyota GR86

The Toyota GR86 has taken a meaningful step forward in this second generation. It’s more powerful, more composed, and more usable day-to-day, but hasn’t lost the spirit of the original.

Toyota has made some strange decisions on the specification front, though.

The fact the base GR misses out on kit that’s standard across the related Subaru BRZ range is hard to defend, especially when the range of safety options on manual models is so skint to begin with.

With both in stock, the fact the base manual Subaru BRZ is better equipped and cheaper than the 86 means it’s the twin we’d be taking home. If you have an affinity with Toyota, or can’t get a BRZ, the base GR86 isn’t a bad backup plan.