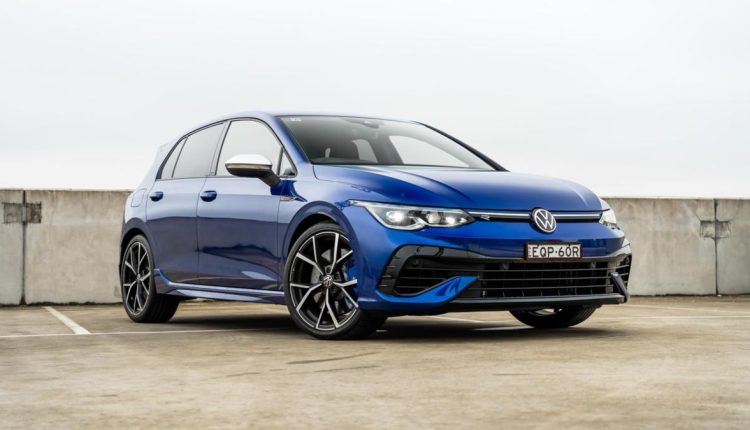 The Volkswagen Golf R is back again.

After initially struggling to escape the shadow of GTI, the R badge is now a staple in the performance car world.

With its blend of performance, all-wheel drive traction, and daily comfort, the last Golf R quickly became a favourite. It’s built a legion of loyal fans, but that hasn’t stopped Volkswagen from trying to push the envelope with the eighth-generation car.

Since the previous-generation model’s launch, the game has moved forward. Volkswagen is facing competition from Hyundai with the i30 N, along with the likes of BMW, Mercedes-AMG, and even Toyota.

Some competitors are trying to offer more luxury, others promise to offer more engaging driving experiences thanks to their clever torque-vectoring all-wheel drive systems. No matter how you look at it, the Golf R is under attack from all angles.

Volkswagen hasn’t taken it lying down. The new Golf R has more power than before, a smarter all-wheel drive system, a more luxurious interior, and a more aggressive exterior design. It’s not a revolution, but it’s an aggressive evolution of the formula laid down by those before it.

It’s also more expensive than before though, with a starting price knocking on the door of $70,000.

Does the new Golf R have what it takes to justify its steeper sticker?

How much does the Volkswagen Golf R Hatch cost?

The Golf R is a much more expensive beast than it used to be.

Volkswagen cut the price of the Golf R Hatch by $1000 before launch because the global chip crunch had forced it to remove the Harman/Kardon sound system from, but it’s still a $65,990 proposition before on-road costs.

Comparing new cars with their predecessors on price can be fraught, but indulge us here. The last Mk7.5 Golf R, the Final Edition, was priced at $57,990 before on-road costs. At the time, it was $2500 more expensive than the regular model.

Volkswagen would argue, however, the Golf R offers performance approaching the level offered by the Mercedes-AMG A45 S 4Matic+ ($99,895).

What is the Volkswagen Golf R Hatch like on the inside?

By now, the good and bad bits of the Golf’s interior are well established. The Golf R is sportier and more luxurious than the wider range, but otherwise shares the same strengths and weaknesses.

The streaks of blue trim are more overt than we’ve seen on previous Golf R and R32 models and the bolstering is more aggressive, both of which are in keeping with the new car’s greater focus on the driver.

With chubby grips and (finally) tall paddle shifters, the steering wheel feels great in your hands.

It sticks with the same gloss black touch-capacitive buttons used elsewhere in the Volkswagen range, which are too easy to accidentally press when you’re driving fast.

Given the space the Golf R now occupies, it’d be nice if those paddles were something other than black plastic as well. Mercedes-Benz has it right with the metal shifters on the AMG A35, for example.

As is the case across the Golf range, buttons are scarce in the Golf R. Two big screens dominate the dash, below which sits a bank of shortcut buttons and touch sliders for the audio volume and temperature.

There’s no denying the showroom appeal of the new setup. It looks thoroughly modern alongside its more traditional, but more staid, predecessor.

The driver’s display is excellent, with sharp graphics that prominently display your speed, revs, and gear position in prime position when you’re in a hurry.

When you aren’t, being able to have a full-screen map directly in your line of sight is a highlight.

As for the new infotainment system? It’s a mixed bag. On the plus side, the graphics are incredibly polished and the responses are iPad slick. Simple tasks are too complex to execute, though.

It used to take one button press to turn on your heated seat, for example, now it takes two – and on a bumpy road at 100km/h, the place you’d naturally rest your wrist to stabilise it is on the touch slider that controls the temperature.

It’s one example of something that works perfectly in a Wolfsburg laboratory, but is a step backwards in the real world.

Given it’s all software, it can be updated throughout the car’s life. With a few tweaks the system could be excellent, but it needs a bit of fine-tuning.

The cubby to the right-hand side of the steering wheel, which was perfect for garage keys or coins, is notably absent though.

The rear seats are very usable for kids or average-height adults, but the chunky one-piece backrests on the bucket seats in the R do loom large in your vision back there.

The Tiguan R is a more natural family hauler, but you already knew that.

Boot space is a claimed 374 litres with the rear seats in place, expanding to 1230L with the 60/40 rear seats folded flat.

Along with the three top-tether mounts, there are ISOFIX points on the outboard rear seats.

What’s under the bonnet?

The Golf R is powered by a 2.0-litre turbocharged four-cylinder engine producing 235kW and 400Nm.

It’s mated to a seven-speed dual-clutch transmission, with drive sent through a 4Motion all-wheel drive system.

The all-wheel drive system is a smarter, more performance-oriented setup than any before it from Volkswagen.

Along with the ability to shuffle torque between the front and rear axles, it’s now able to split the torque sent rearward between the individual wheels.

Not only does that help cut down on understeer, it allows for a Drift Mode similar to the system offered on the Audi RS3 and Mercedes-AMG A45 S.

Claimed fuel economy is 7.8 litres per 100km on the combined cycle, we saw exactly that figure over 600km with a skew to highway driving.

The Golf R drinks 98 RON premium unleaded, and has a 50L fuel tank.

How does the Volkswagen Golf R Hatch drive?

There are few better all-weather performance cars than the Golf R. We did more than 600km in the hatch in some atrocious conditions, and it was never anything but rock solid, and properly quick.

Volkswagen claims the 100km/h sprint flies by in 4.8 seconds, but instrumented tests from other outlets suggest it’s much quicker than that. It feels it in the real world.

Bury your foot from standstill and the engine inhales briefly, before blowing you down the road with a minimum of fuss.

There’s no wheelspin or histrionics, but it’s brutally effective. Using launch control ramps up the ferocity, getting the Golf off the mark with neck-snapping efficiency.

Like the GTI, the R has a huge range of drive modes.

It defaults to Sport which feels purposeful but daily driveable, but can be cranked up to Race (stiffer ride, more engine noise, heavier steering, sharper powertrain) or Special, which is tailored to the Nurburgring and offers full performance with a softer ride.

The best mode, though, is Individual. You’re able to tailor the adaptive dampers through 15 different settings, and combine those settings with your preferred mix of powertrain, steering, and noise settings.

With the dampers set between Comfort and Sport, the powertrain in full angry mode, and the fake engine sound turned off, the R is arguably the ultimate tool for demolishing an Australian back road.

Driving out of Apollo Bay through the Otways in pouring rain and howling wind, it’s hard to imagine a car capable of going faster; the R just charges through standing water and puts its power down in places more serious metal just can’t.

Traction is immense, and you immediately trust the front end to bite when you pour the R into a corner carrying serious speed. Once you’re in, you can feel the new all-wheel drive system shuffling power to the outside rear wheel for a more neutral feeling than was possible in its predecessor.

The dual-clutch transmission slams through the gears at a ferocious pace, confidently downshifting under brakes in auto mode or faithfully heeding your inputs from the taller (but still plastic) paddles behind the wheel.

It’s still not the liveliest hot hatch out there, but it feels more adjustable and alive than before, backed by the same raspy bark that’s characterised this engine in its various guises throughout its life.

We didn’t have the space to try Drift Mode, but Tony Crawford has confirmed it works if you ever have access to a skid pan.

Being a Golf R though, it’s not constantly straining at the leash. In its more relaxed drive mode, the dual-clutch shuffles to a tall gear and just leans on the engine’s generous helping of low-down torque to get around.

Even on 18-inch alloy wheels the ride is perfectly acceptable over rough city streets, although potholes can ruin its composure if you hit them at speed.

It’s a very capable highway cruiser when the road surface is smooth, with a comfortable ride, silent engine, and the full IQ.Drive suite of assists to keep the car in its lane, and a set distance behind the vehicle in front.

When the road surface deteriorates though it can be a bit noisy, though. It’s a common complaint with European cars running on performance-oriented rubber like the R, but it does somewhat undermine the car’s all-round appeal when you have to crank the stereo to drown out the static.

What do you get?

Options for the Golf R range include a Harman/Kardon premium sound system for $1000, as well as a sunroof which costs $1900 for the hatch and $2000 for the wagon.

That’s atop the following equipment from lower grades:

The Volkswagen Golf wears a five-star ANCAP safety rating based on tests carried out by Euro NCAP in 2019.

All Golf variants bar the base model also include Emergency Assist and safe exit warning, while all models feature eight airbags as standard.

How much does the Volkswagen Golf R Hatch cost to run?

The Volkswagen Golf R is backed by a five-year, unlimited-kilometre warranty.

Volkswagen has improved the Golf R formula, no doubt about it.

Its strong-selling predecessor wasn’t exactly slow, but the new car is meaningfully faster and more driver-oriented than before thanks to its more sophisticated all-wheel drive system. It’s still the ultimate all-weather weapon, but it offers more for keen drivers than ever.

Is it perfect? Er, no. The annoying parts of the regular Golf are annoying here too, but in a more expensive package.

Volkswagen’s bet on the interior hasn’t paid off. I lost count of the number of times a simple task became cause for frustration, and no amount of time or familiarity with a car can make bad design good.

Even with its new all-wheel drive system and more vocal exhaust, there will still be enthusiasts the Golf R – with its polished powertrain and lack of a manual – doesn’t excite. Of course, the fact Volkswagen has so effectively smoothed out the rough edges from the Golf R is a key part of its broader appeal.

The new Golf R is not just the most versatile hot hatch on the market, it’s one of the most capable performance cars money can buy.

It isn’t perfect, but it’s closer than ever.