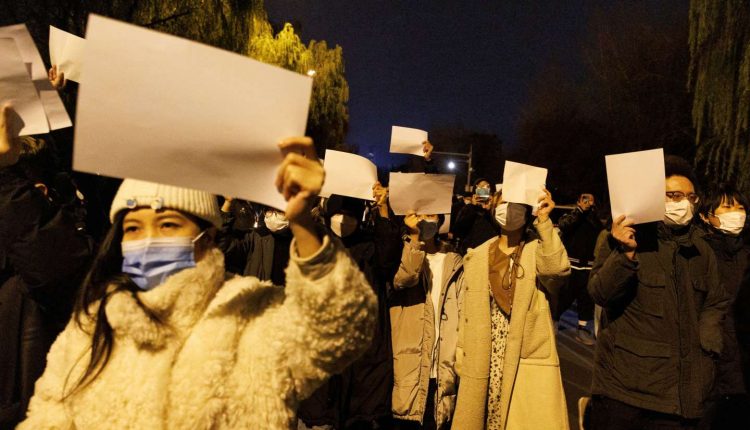 Grandstand. A burning building on the night of November 24 in Urumqi (Xinjiang), the capital of the Uighur region, brought Chinese citizens out of a long dystopian night. A barricaded Uighur district, locked doors, a building mainly occupied by Uighurs, literally out of reach of the emergency services who are hampered in their intervention, due to strict confinement.

That night, the ordeal of these Uighur families confined for nearly four months, starving, deprived of care, trapped between four walls, suddenly became the nightmare of all Chinese citizens.

This tragic event, which is said to have caused the death of forty-four people and left many injured – while the authorities recognize only ten deaths – triggered everywhere else in China, for example in Urumqi Street in Shanghai, a wave of demonstrations led by students in universities and exasperated citizens, brandishing white sheets as a banner [symbole de l’absence de liberté d’expression]. However promising it may be, this “white paper revolution” should not hide what the terrible event in Urumqi highlights in the first place.

Because make no mistake about it. The Urumqi fire is not just the effect of a drastic China-wide policy to fight Covid-19. Urumqi is the capital of an “autonomous” territory populated mainly by Uighurs that the Beijing regime has persecuted since its invasion in 1949 with a colonial logic of forced sinicization of the population. The zero Covid policy has been applied there in a particularly unsustainable way.

Read also: Article reserved for our subscribers “Xinjiang Police Files”: revelations about the Chinese repressive machine against the Uighurs

Since August 10, the Uighurs have been subjected to total confinement, forcing them to live in starvation and lack of care through the authorities’ refusal to deliver food and medicine. Since 2017, China has been pursuing a genocidal and concentration camp policy against the Uighur population, which the parliaments of eight democracies have recognized as genocidal crimes and crimes against humanity.

The fight against Covid-19 revolves around a series of systemic persecutions that have the effect of disciplining bodies and minds. This logic of confinement now spreads outside concentration camps, forced labor factories and prisons and extends even into homes, which have become disastrous prison cells. In October, thousands of Uighurs had testified on Douyin (TikTok in China) of the dramatic situation of the famine which caused the death, in particular, of children and fragile people.

You have 54.75% of this article left to read. The following is for subscribers only.

Who is the new Secretary-General of the…

“Welcoming can only enrich our…

Leicester City, Leeds and Southampton to…

Minister Paus: “Child poverty is a…