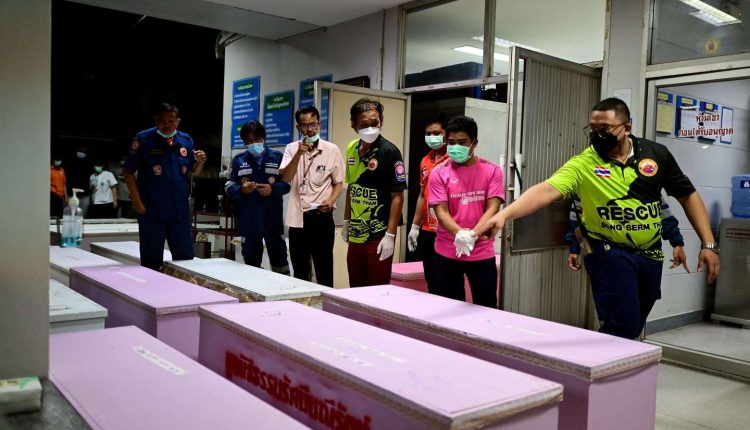 Small white and pink coffins, adorned with golden festoons, take up all the space in a hospital room and corridor: images of the tragedy that hit northeast Thailand on Thursday, October 6, and lasted thirty- eight deaths, including the killer, are rare, as this one is undoubtedly beyond comprehension. Flags at half mast, the kingdom of seventy million inhabitants is in shock: there were twenty-four children, the majority between 2 and 4 years old, among the victims of ex-police corporal Panya Khamrab, aged 34 years old, who landed, a little after noon, in the crèche of his son, in Uthai Sawan, a town in the province of Nong Bua Lamphu.

With an automatic pistol, the man killed four employees of the crèche who were having lunch on the porch. He entered the building, broke down the door, then slit the throats of the sleeping children with a butcher’s knife. An eight-month-pregnant woman was fatally stabbed. The madman then took his car, intentionally hit at least a dozen people, including several fatally, before returning home, 5 kilometers away. He then killed his wife and 3-year-old child before killing himself.

Funeral supported by the King

“Things like this shouldn’t happen, absolutely shouldn’t happen”, declared, on Thursday, the Prime Minister, General Prayuth Chan-o-cha, who was expected on Friday at the scene of the tragedy to welcome the royal couple, King Rama X and Queen Suthida, at the end of the day, whose appearances are rare. The Royal Palace has announced that it will take care of the funerals of the victims. Many questions still remain unanswered about the motives for the killing and the precise circumstances of the madness of the ex-sergeant corporal, who suffered from drug addiction problems.

Also read the archive (2019): Thailand and its drug-trafficking minister

According to the Deputy Chief of National Police, who quotes the madman’s mother, Sergeant Khamrab had attended a local court hearing the same morning for use and possession of methamphetamines. This affair had earned him to be expelled, on June 15, from the police, after an arrest in January. After the hearing, “He looked very stressed, took drugs and was paranoid”, Mr. Khamrab’s mother told authorities. The automatic pistol used had been purchased legally and belonged to him.

Thai society is much more violent than the Epinal image conveyed to tourists by the “land of smiles” : it is, with the Philippines, the country where the rate of homicide by firearm is the highest in Southeast Asia, at four per hundred thousand people – much more than in Europe, but less than ‘in the USA. Ten million firearms are owned by individuals, four million of which are unlicensed.

You have 33.23% of this article left to read. The following is for subscribers only.