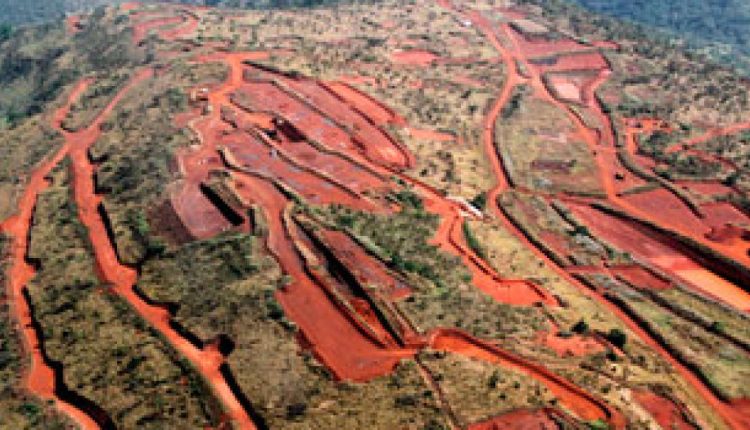 At the heart of a soap opera with twists and turns that has been going on for decades, the “iron mountain” of Simandou, located on the south-eastern borders of Guinea, will it finally be exploited? The transition authorities put pressure on the operators. The National Committee for Rally and Development (CNRD), led by Colonel Mamady Doumbouya since his September 5, 2021 coup against Alpha Condé, informed them that it was firmly counting on an entry into production in 2025.

Convened on December 7, 2021 by the former legionnaire who became a putschist, the Winning Consortium Simandou (WCS), responsible for blocks 1 and 2 of the deposit, and the Anglo-Australian group Rio Tinto (blocks 3 and 4), confirmed the day even their commitment to develop the project. WCS thinks it can meet the very tight deadlines, which it had already affirmed, on November 23, during a meeting with the civilian prime minister of the transition, Mohamed Béavogui.

The deposit contains 8 billion tons of iron, the raw material at the base of steel production. Each of the two operators could produce 100 million tonnes of ore per year for several decades (for an annual global production of 2.3 billion tonnes). The exploitation of Simandou should bring considerable income to Guinea: drawn from dividends, the State being a shareholder with 15% of the future mines; but also various taxes and royalties. Especially since Guinean ore is of high quality (65% iron content), which raises its selling price per ton on international markets. Despite a series of tax exemptions granted to the two operators, the Ministry of Mines of Guinea has estimated that the exploitation of Blocks 1 and 2 of WCS will bring in 15.5 billion dollars (13.5 billion euros) to the State, spread over the twenty-five years of validity of the mining agreement concluded in 2020.

Thousands of jobs to be created

This mining megaproject also includes the construction of 650 km of railways crossing Guinea from east to west to transport the ore to the port from where it will be exported. This titanic enterprise will open up a large part of the country. It should potentially create economic activities along the way and, therefore, thousands of additional jobs. Several companies have notably requested mining concessions on land located along the future railway line.

The exploitation of Simandou would diversify the mining activity of Guinea, dominated in recent years by bauxite. The extraction of this ore, the basis of aluminum production, has literally exploded, going from 16 million tonnes per year in 2013 to 88 million in 2020.

Fadi Wazni, the managing director of WCS, a company with Singaporean, Chinese and Guinean capital, affirms that the feasibility study for the start of production will be “finished in February”, at the latest. According to him, “4.8 billion dollars” contracts have been signed with several Chinese companies, including subsidiaries of the China Railway Construction Corporation (CRCC) for the construction of the railway.

The ceremony to lay the first rail of WCS, scheduled for December 2021, has been postponed by the president of the transition who wants to review the technical studies relating to the railway and the port of embarkation beforehand. Until then, these studies had not been transmitted to the administration whereas they must be validated by the Interministerial Commission evaluation of studies, a body created before the junta came to power. According to Akoumba Diallo, journalist specializing in the mining sector and author of the essay In the arena of Simandou (ed. Edilivre), the government commission produced “a favorable report with some reservations”taking into account the “impressive projects” already engaged. “The Guinean State has an interest in seeing these infrastructures set up”adds the journalist.

This commission is not intended to review and potentially cancel mining titles, as the Strategic Committee for the Review of Mining Titles and Agreements did in 2014. This body then recommended to President Alpha Condé (2010-2021) to withdraw the rights to a joint venture formed between the Brazilian mining giant Vale and the company of Israeli billionaire Beny Steinmetz on blocks 1 and 2 of Simandou. This decision had triggered a legal battle and arbitrations involving several billion dollars.

The laying of the first rail has therefore been postponed sine die. Only preparatory work is allowed. The construction of the railway is however essential to the success of the Simandou project. But pulling 650 km of tracks linking this landlocked deposit near the border with Liberia and the Atlantic coast is a logistical challenge. Non-governmental organizations are also concerned about its impact on biodiversity.

About 10 billion dollars (to which are added another 5 to 10 billion for the mines and the port) will be necessary for the construction of these infrastructures, according to the initial forecasts of Rio Tinto which has held permits in Simandou since 1997 but has not never gave a “start signal” to the works. The mining giant even announced, in October 2016, its intention to sell its shares in the project to its co-shareholder, the Chinese group Chinalco. The transaction was never finalized.

Since then, Rio Tinto has been updating its data and delaying before making the final decision to invest in the project. Negotiations have started with Winning Consortium Simandou to define the terms of a possible collaboration on rail infrastructure.

Yet Andrew Gadd, senior steel analyst at CRU Group, a business intelligence firm specializing in minerals and metals, “does not expect Rio Tinto to develop its blocks 3 and 4”. The analyst judges that it would be “a poor allocation of the resources of the mining group given that the combination of the volume of capital required, the risks associated with the project and its rather low return on investment would bring little return to the shareholders”. The political instability in Guinea as well as the drop, expected by 2030, in the world demand for iron ore do not play in favor of the project. Andrew Gadd also recalls that the entry into production of Simandou “will push iron prices down over the long term by bringing a large additional volume to the market, reducing the profitability of operating mines, especially those in the Australian Pilbara”, where Rio Tinto is active.

On condition of anonymity, a former executive of the Simandou project at Rio Tinto concedes that the mining group is not yet convinced of its profitability. But he clarified that if WCS moves forward, then Rio Tinto may be forced to do so as well. The Guinean authorities could threaten to withdraw its rights to the deposit in order to find another operator.

Getting rid of a site with such resources is not the best calculation for Rio Tinto, the world’s second largest producer of iron with around 320 million tonnes produced per year. Especially since demand, even on a downward trend, will remain significant. In particular from China, which imports 75% of the world’s iron production each year and consumes 55% of that of steel. Chinese manufacturers also want to diversify their supply beyond the current major production centers: Australia, with which diplomatic and trade relations have been strained in recent months, and Brazil.