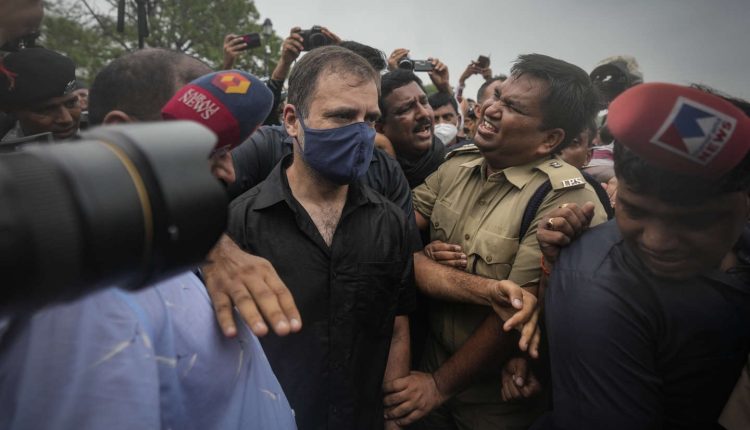 Indian democracy is weakening every day. The government of Narendra Modi has just provided a new illustration of this, Friday August 5, by arresting the leaders of the opposition who intended to protest peacefully throughout the country to denounce, in the street, the soaring prices, the unemployment, and raising taxes on essentials, after being prevented from raising these issues in Parliament. The operation was called “Black Friday” (“Black Friday” in English).

Several Congress MPs, who wore black shirts in unison, including its leader Rahul Gandhi and his sister Priyanka, were taken away by police in New Delhi. A total of sixty-five parliamentarians were detained for six hours. To stop their march, the government had imposed the application of article 144 of the code of criminal procedure which prohibits any gathering of five or more people, as well as the holding of public meetings.

Read also Article reserved for our subscribers Rahul Gandhi, the opponent of Narendra Modi in the sights of Pegasus

“We are here to raise the issue of rising prices. Our job is to resist these forces, to ensure that democracy in India is protected, to raise people’s issues. This is what we do “, said Rahul Gandhi, during his arrest. His sister, secretary general of the Congress, was dragged by the police into a security vehicle. “For the Prime Minister, did she have time to declare, there is no inflation. He gave the wealth of the country to a few people, they have a lot of money, they can’t see the price rising. But the man of the people suffers. Flour, rice, cooking gas, everything has become expensive. »

On the same day, the Reserve Bank of India echoed protesters’ concerns, saying retail inflation has been above the upper “tolerance threshold” of 6% for six consecutive months, until June. The price inflation indicator had reached its highest level in eight years, at 7.79%, in April. The subcontinent is also facing a serious employment crisis. Data from the private research firm Center for Monitoring Indian Economy shows unemployment rose to 7.8% in June from 7.1% the previous month, with a rate of 43.7% in the age group 20-24 years old.

On the occasion of the monsoon cession, which began on July 18, the opposition had asked for a debate in Parliament on these issues of the high cost of living, unemployment and governance. In response, twenty-three deputies from the upper house and four deputies from the lower house, representing different opposition parties, had been suspended by the two presidents.

You have 63.5% of this article left to read. The following is for subscribers only.