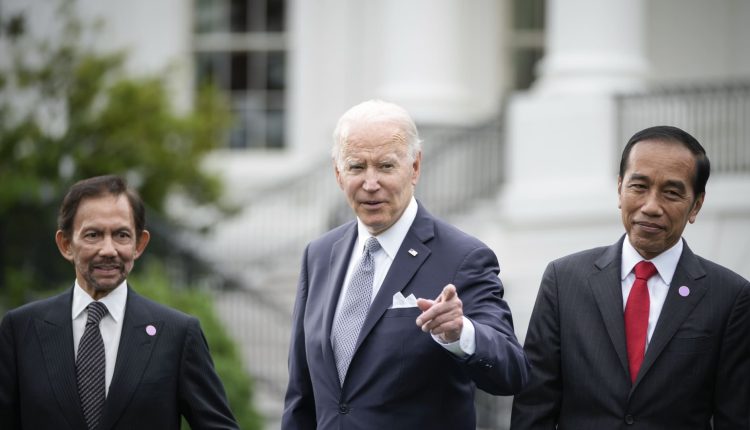 Indonesian President Joko Widodo, here seen standing to the left of U.S. President Joe Biden during a summit meeting of Southeast Asian leaders at the White House in May, hinted that he may try to launch a peace initiative during his upcoming visit to Europe.

Indonesia’s president says the war in Ukraine must end as it’s driving up food and energy prices and putting developing nations like Indonesia at risk.

“The most important thing that I’m concerned with is the food price. So, we want the war in Ukraine to be stopped, resolved with negotiation so that we can concentrate [on] the economy,” President Joko Widodo told CNBC in an exclusive interview in Serang city in Banten province on Friday.

“If not, it will never be over, this is dangerous for countries, particularly, developing countries.”

Jokowi, as he’s popularly referred to back home, said the war should be resolved through negotiation and dialogue.

The Indonesian leader is attending the meeting of the Group of 7 advanced economies at the invitation of host country Germany from June 26-28. Russian news agency Tass reported last week that Jokowi will be meeting President Vladimir Putin on June 30.

“After G-7, I will visit several countries that are related [to the] food issue,” he told told CNBC’s Martin Soong. Jokowi declined to confirm if he was visiting Russia or Ukraine, which are among the world’s largest producers and exporters of food grain.

There’s a problem here and the problem is war. In G-20, we also need to invite Ukraine so that we can resolve the problem.

The U.S. and China are engaged in a tussle for dominance in Southeast Asia, with the U.S. calling the Indo-Pacific region the “heart of American grand strategy” and China asserting territorial claims over almost all of the South China Sea.

Asked about whether Indonesia was caught in the geopolitical tussle between the U.S. and China, Jokowi insisted his country was “close friends” with both.

The Indonesian president went on to say that Indonesia’s trading relations with both countries remained strong, and that the U.S. and China are both strategic partners to Southeast Asia’s largest economy.

We want this region to be peaceful so that we can build our country and have better economic growth. Rivalry, let alone war, will not be beneficial for any country.

U.S. bilateral goods trade with Indonesia amounted to more than $37 billion in 2021, while bilateral trade in services were at an estimated $2.4 billion in 2020, according to the State Department.

China is Indonesia’s largest trading partner, with trade estimated at $124.34 billion in 2021, according to Chinese customs data reported by the Indonesia’s embassy in China.

On whether the Quad strategic alliance or the AUKUS nuclear and security deal that Australia signed with the UK and the U.S. last year risks angering China, Jokowi said: “We don’t want our region to become the platform for rivalry [between] big countries.”

“We want this region to be peaceful so that we can build our country and have better economic growth. Rivalry, let alone war, will not be beneficial for any country.”

Following Australia’s decision to acquire nuclear-powered submarines under the AUKUS deal, Indonesia said it was “deeply concerned” about the “continuing arms race and power projection in the region.”

Pressed on whether Indonesia’s relationship with Australia soured as a result of AUKUS, Jokowi said: “Most importantly, we want Indonesia and Australia to have [a] better relationship in the future, in investment, in trade, and others, we want it to be better.”

He expressed hope that relations with Canberra could improve under the leadership of new Prime Minister Anthony Albanese.

“Both of us want our relationship to be better, closer and more concrete in investment and trade. Because now we already have Indonesia Australia CEPA, so this is our common goal, to be open so that goods from Australia can enter Indonesia, goods from Indonesia can enter Australia,” the president said.